What do they believe? What do you think? Talk about religion as it exists today.
Post Reply
18 posts

Corbyn rejects criticism of anti-Semitism code, says it will stay


Corbyn wrote in a Friday article for the Guardian that the Labour would stick to its code of conduct on anti-Semitism as it respected the rights of those Jews who were in fact not Zionists.

“[T]here are also many non- or anti-Zionist Jews who should not be branded as anti-Semites simply because they are not part of the Zionist tradition,” Corbyn said in the article, adding that the pressure on the party over the code came from people who want to “restrict criticism of Israel.”


Tens of thousands protest against the nation-state law at a rally organized by the Druze community, Tel Aviv, Israel, 2018.\ Moti Milrod

"No one can teach us about sacrifice and preach to us about loyalty, and the military cemeteries can attest to that," Tarif continued. "Despite our unreserved loyalty, Israel doesn't see us as equals. As much as we fight for the existence and security of the state, we are just as determined to fight together with you for Israel's character and the right to live in it with equality and respect," he added.
https://www.haaretz.com/israel-news/.pr ... -1.6341244
Top

What is this thread about?
Top

It is about the right to disagree in freedom and dignity.

https://www.thejc.com/news/uk-news/kadd ... r-1.466565
“Reform Judaism is at the forefront of standing up to these kinds of bullies and abusers, and we have consistently demonstrated this. We know that there are many who express their anger and hurt far more constructively.
“People who act abusively will never have any influence over our decision making processes.”
Rabbi Janner-Klausner has previously warned that online targeting of the Kaddish participants – including death threats – was a “path to self-destruction”.
viewtopic.php?f=10&t=4354
Top

You can't reform a religion that a fixed scripture, if they don't like the religion, then they should leave, why is that so difficult for them.
https://vivliothikiagiasmatos.files.wordpress.com/2012/01/joseph-yahuda-hebrew-is-greek.pdf
Top

Israel controls all entrances and exits to the occupied West Bank and can prevent goods passing through as it sees fit. The policies have crippled Palestine's economy and its residents' freedom of movement. 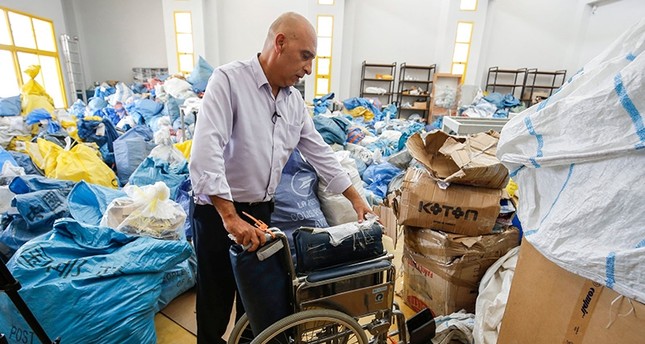 Ramadan Ghazawi, a Palestinian official at the post office in occupied West Bank city of Jericho, stands next to a folded wheelchair, one of many items of previously undelivered mail which has been withheld by Israel, on Aug. 14, 2018. (AFP Photo)
Top Rev Dr Richard Frazer, convener of the Kirk’s Church and Society Council, said:
‘I was horrified by the reported events and plead with the Israeli authorities to stop the evacuation and demolition of Khan Al Ahmar and other Bedouin communities across the Occupied West Bank.
“Not only do such actions contravene international law and reflect badly on a nation that takes pride in being the only democracy in the Middle East, they undermine Israel’s stated commitment to a just peace based on the two-state solution.
“Our thoughts and prayers are with the people of Khan al Ahmar at this time.”
Top