Church of the Holy Sepulchre

The theory that Aelia Capitolina, "the old city" was a suburb, has never been proven. And in fact there doesn't seem to be anything underneath the Roman polis to indicate there was anything there before the Romans built it. The only thing they have found are Byzantine/Roman artifacts. This speculation of a northern suburb never mentioned by anyone does however fits relic merchants, if not Archeology.

Roman practice was to build a polis on unused land. Jerusalem ruins would have been a ready quarry just beyond the new city wall. Are you suggesting that the buildings of this fictitious suburb were so flimsy they left no trace?
“’That was excellently observed’, say I, when I read a passage in an author, where his opinion agrees with mine. When we differ, there I pronounce him to be mistaken.” - Jonathan Swift
Top

I think that you are saying that the only artifacts from the area are Roman ones, not Jewish ones, and so the area must have been uninhabited at that point. And also you are suggesting from this that there must have been no wall in that area for Jesus to be crucified near. However, we know that there were three rings of walls in Josephus' time, as he tells us, and in the story of Jesus, Jesus was crucified outside the city's walls. It makes sense that this would have reasonably been outside the second ring of walls, since the third wall was built after Jesus' time.

I understand also that you are saying that there were only Roman ruins in the alleged northern suburb, and that Romans didn't build there until after the destruction by Hadrian because Romans only build in fresh unbuilt areas.

This reminds me of the question of whether Zabulon and Nazareth were real cities in the mid 1st century. We find Zabulon's ruins existing from the Bronze period, but not much in the Roman period when Josephus says it was a city. Maybe the archeologists are missing something in Zabulon's location. Likewise, we don't find much in the way of ruins in Nazareth from the 1st century, but we do have numerous records about it from the first or mid second century. Maybe the buildings were wood and rotted or burnt. Who knows.

Anyway, here is some information about the second wall:


The suburbs to the north were enclosed by two successive fortification walls, called the Second Wall and the Third Wall... Although Josephus not does mention who built the Second Wall, most scholars believe that Herod is the best candidate because of the chronology (the First Wall is earlier and the Third Wall is later), and because there was so much growth and construction during his reign.

Josephus also describes the routes of the First, Second, and Third Walls. 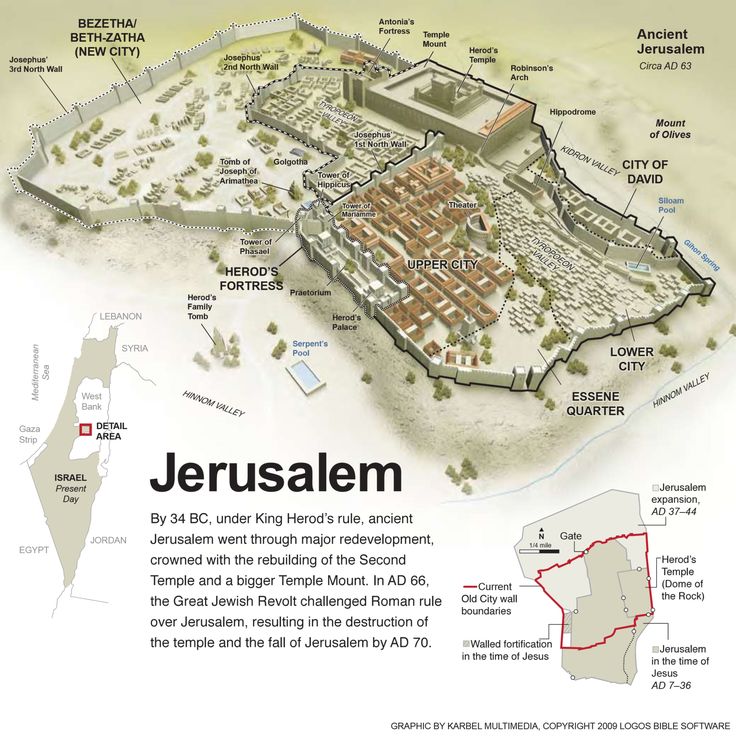 So even if one wants to argue that the alleged suburb was uninhabited, one still is left with the job of mapping out the first and second walls that were built by Herod before the destruction of the temple in 70 AD.
My research on the prophecies of the Messiah's resurrection: http://rakovskii.livejournal.com
Top

So even if one wants to argue that the alleged suburb was uninhabited, one still is left with the job of mapping out the first and second walls that were built by Herod before the destruction of the temple in 70 AD.

Those "walls" did not exist, or left rather no archeological trace. Nothing, not even post hole imprints like one finds for even temporary walls through up by the Romans when fighting the Gauls, not even in infrared satellite imaging. Zip, nothing, nada. They have found Roman stables for horses (2nd century), but nothing for these walls.

Timber was scarce in the region, as it is today, so if there were barricades they'd have had to have been earthen and stone. That would have meant digging and moving rocks, which would have left a trace.

So something is wrong with the Temple Mount location, or Josephus' account is wrong. There is no mention of battles to take the walls one by one until they come upon the main wall, only the battle for the fortress Antonia (probably what we call Temple Mount).

The archeology simply does not support the notion that anything was under the ground of Aelia Capitolina, except what the Byzantine Romans built. I know this runs counter to hundreds of years of traditional teaching, but given a choice between tradition and archeology, ... it's no contest.
“’That was excellently observed’, say I, when I read a passage in an author, where his opinion agrees with mine. When we differ, there I pronounce him to be mistaken.” - Jonathan Swift
Top

Timber was scarce in the region, as it is today, so if there were barricades they'd have had to have been earthen and stone. That would have meant digging and moving rocks, which would have left a trace.

In his writings, Josephus talks about masses of timber being used for military purposes like walls, towers or siege engines in the first century. He said that this resulted in loss of natural timber. The major scarcity to the degree that you are thinking of it came after the 1st century.

If one accepts the existence of the second wall that Josephus reported, one must draw a route.
My research on the prophecies of the Messiah's resurrection: http://rakovskii.livejournal.com
Top


The place for the Holy Sepulchre is in a reasonable location for where Golgotha and the tomb could have been.


Golgotha was supposedly a hill outside and near the city walls of the time, which is also a reasonable place for where the Romans could have killed Jesus. In Constantine's time it would have still been feasible to find a place matching the known qualities of the hill, and there reasonably could have remained knowledge up to that time of where the Romans had been preferring to crucify convicts.

Again, it's difficult to judge the strength of the claims you are making. Are you saying hat the CHS is plausibly on the site of the crucifixion, though other possibilities are also plausible? Or that the theory that the CHS is not on Golgotha is implausible/improbable?


Also, there are numerous Jewish tombs in the area, so it's a reasonable place where Joseph of Arimathea could have had his tomb. And it's not too far from Golgotha - the nearing of the Sabbath meant that they wanted to find a location not far from the place of execution.

So it seems that you are arguing for the site of the tomb as well as the site of the crucifixion. But what does this add to the case? It seems overwhelmingly likely that some site in Jerusalem would be identified as the site of the empty tomb in the fourth century when the city was being turned in to a Holy City for Christian pilgrimages, whether there was a prior tradition or not. And it seems only slightly at less likely that some tomb would be identified as the tomb of Jesus. Does this do anything to falsify Wharton's thesis that Constantine first chose to demolish a pagan temple to Venus and/or Jupiter (or possibly Tyche) and that a Jewish tomb discovered under the site was then taken to be the tomb of Jesus?

How is this relevant? Wasn't the Church of the Cenacle built after the site of the Holy Sepulcher had been chosen? Does this tell us anything about the site before that time?

I have a request: I'm researching an article on the question of whether the Church of the Holy Sepulcher marks the spot of the actual tomb of Jesus and I realize my knowledge of the literature may be a decade or more out of date. The most recent significant work I know is:

Does anyone know of more recent significant work on the topic? I mean academic work of at least subchapter length and dealing with the CHS particularly, not focusing on the Garden or Talpiot tombs or just arguing that there was no tomb.

Here's a 2019 publication, but I haven't read it, so don't know if it fits your request:
The Church of the Holy Sepulchre in text and archaeology :
a survey and analysis of past excavations and recent archaeoogical research with a collection of principal historical sources /

Thanks, Stephen. I downloaded the ebook from the publisher after looking a the Table of Contents in the preview. It looks extremely useful. Kelley appears not to be pushing a particular thesis (at least not very hard so far as I've read), but to be summarizing the scholarship on the issue. (Wharton is missing, Biddle and Taylor are there), giving a history of the various excavations, and providing a catalogue of the primary sources and a collection of excepts from the major ones.

[13] When Pilate heard these words, he brought Jesus out and sat down on the judgment seat at a place called The Pavement, and in Hebrew, Gab'batha.
***
[17] So they took Jesus, and he went out, bearing his own cross, to the place called the place of a skull, which is called in Hebrew Gol'gotha.

I've always found it odd that we are given two very strange words - "...called in Hebrew..." - "Gabbatha" and "Golgotha" within a few verses of each other. Gabbatha is a single use word in the NT. Of course, since Existence is a Predicate ( /S ) when discussing "Jesus" (Because..."Jesus") these places MUST exist and we must identify any Relic as Truly Existing - We just gotta find it, that's all.

The Apologist Bauscher - who dislikes what I write almost as much as SA - has written that "Gabbatha" is a one-way Translation. You cannot go from Greek back to Hebrew Gabbatha with any combination of common meanings from the Greek.

Which leads me to what these Word-Plays might mean. The best I could come up with is "Galba-Otho" which fits as a description of the Roman Timeline for the Background of the NT.

As for the Housing Development north of the Temple/Antonia Complex, there is "Bezetha". Which sounds suspiciously like "Bethsaida".

Those speculations, however, must be wrong - because "Jesus", of course.
Keep looking. I'll be happy to purchase a box of "Jesus Matches" when they become available. You can't make Holy Smoke without a Holy Light.
Thanx, Constantine.