On the link between Capernaum and John the Baptist

If the Earliest Gospel described shortly the descent of Jesus in Sheol (hence assuming already his death in outer space), then his resurrection and his preaching/healing in Sheol, then his ascension, that first version was suddenly expanded by the account of what the Risen Jesus did shortly on earth before his definitive ascension to heaven: he found the followers of John the Baptist, who believe him John redivivus and therefore follow him, until to Transfiguration (=original Ascension).

When the descent to Sheol was taken as the descent to Capernaum, a "city of Galilee", then it became necessary to traspose on the earth the original celestial crucifixion.

The fact that in Mark, the earliest gospel but only among the survived Gospels, there was no witness at the Empty Tomb, is because, in the Earliest Gospel (before Mark), the 12 disciples were already per se witnesses of a Risen Jesus. Only, even so, they were so obtuse that they didn't realize that their Jesus had already been crucified (in outer space), he had already descended in Sheol, he was already risen in virtue of the his only presence on earth.

Hence, when "Mark" (editor) added the Passion story on the Earliest Gospel, he didn't need other witnesses of the Resurrection because, just as for the Earliest Gospel, the only person who was assumed in advance to have realized that the Jesus seen by the Pillars on the earth was already a Risen Jesus, is Paul.

Hence the circular structure of our Mark,

...reflects the idea of the original gospel: the earthly Jesus was already a Risen Jesus.

Only, the Pillars in the story didn't realize it. Just as the outsiders had not to realize it.
Nihil enim in speciem fallacius est quam prava religio. -Liv. xxxix. 16.
Top

Acts 1:22:
beginning from John’s baptism to the time when Jesus was taken up from us
The original meaning of "ascension to celestial Jerusalem" was even left where it was in the disiepta membra of the Earliest Gospel:

Luke 9:51
As the time approached for him to be taken up to heaven, Jesus resolutely set out for Jerusalem.
Luke 19:28
28 After Jesus had said this, he went on ahead, going up to Jerusalem.
Luke 19:38
“Blessed is the king who comes in the name of the Lord!”
“Peace in heaven and glory in the highest!”
In the last verse, it is evident that the angels welcomed Jesus in the celestial Jerusalem, not the people of the earthly Jerusalem.
Nihil enim in speciem fallacius est quam prava religio. -Liv. xxxix. 16.
Top

Independently from me, Heracleon fixed it:

The ascent to Jerusalem signifies the ascent of the Lord from material realm things to the animate (psychic) place, which is an image of Jerusalem
(Fragment 13, on John 2:13-16)
Nihil enim in speciem fallacius est quam prava religio. -Liv. xxxix. 16.
Top Now I have modified the same image, to visualize where precisely the Archon Guard of the Gate to Heaven (Pylatis) was localized in the previous myth and by who was easily euhemerized in the real History. 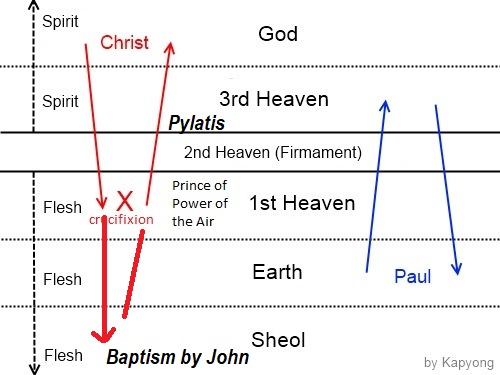 Note that the original Jesus Son of Father released by Pylatis during his ascension from the Sheol prison of souls, was euhemerized himself as Bar-Abbas, released by Pilate from the his prison of Zealots.

The image allows to visualize where the Jesus of the first gospel was originally baptized: by the soul of John the Baptist in Sheol.

Also Herod had the role of gate-keeper just as the demon Archon Pylatis, i.e. Herod was another Pylatis before that Pylatis became Pilate. We can infer this role for Herod from the intrinsic meaning of the "elegant robe": the increasingly angelic/ethereal body the risen Jesus had to assume, during his gradual ascension to upper heavens through the various archontic Gate-Keepers (Pylatis and the Prince of Sheol, i.e. Herod).

Isaiah 53:9
He was assigned a grave with the wicked,
and with the rich in his death,
though he had done no violence,
nor was any deceit in his mouth.
Joseph of Arimathea could be invented to eclipse the role of John the Baptist as the original author of the burial of Jesus in Sheol (the baptism being de facto a burial, a baptism "of death"). The wicked are the souls in Sheol, all sinners in the eyes of the demiurge.
Nihil enim in speciem fallacius est quam prava religio. -Liv. xxxix. 16.
Top

Now this is interesting:
For other evidence, the baptism was connected with the death, i.e. made on who was going to die, or was already dead.

Hence, it was more expected a Gospel version where the baptized had to die shortly after.

Giuseppe wrote: ↑
Fri Mar 13, 2020 8:08 am
Now this is interesting:
For other evidence, the baptism was connected with the death, i.e. made on who was going to die, or was already dead.

Hence, it was more expected a Gospel version where the baptized had to die shortly after.

And not the Baptizer.

Now, it is clear that who puts John in prison was the demiurge, since Mark is based on Mcn, that had in the his incipit the Marcion's Sheol Myth reported by Irenaeus (1:27), where John and the OT prophets were left in Sheol for his hostility against Jesus.

Hence who disappeared after the baptism was Jesus himself: he disappeared from Sheol, after he received the baptism of death by John and started to preach the Gospel in Sheol.

The Herod's interest about Jesus:

When Herod saw Jesus, he was greatly pleased, because for a long time he had been wanting to see him. From what he had heard about him, he hoped to see him perform a sign of some sort.
(Luke 22:8)

...seems to be designed deliberately to confute the role held by Jesus in a lost gospel where he was killed by Herod (not by Pilate): the role of Revealer.

As the polemic goes, if Jesus had nothing to reveal to Herod, then he was not a Revealer. He was not the redivivus Serpent of Genesis, i.e. the Revealer par-excellence. He was not the Jesus of the pre-Christian naassene Hymn.
Nihil enim in speciem fallacius est quam prava religio. -Liv. xxxix. 16.
Top
Post Reply
98 posts