The celestial cross in the ancient world

The celestial cross in the ancient world

Next, He split all this that He had put together into two parts lengthwise; and then He laid the twain one against the other, the middle of one to the middle of the other, like a great cross; and bent either of them into a circle, and join them, each to itself and also to the other, at a point opposite to where they had first been laid together. And He compassed them about with the motion that revolves in the same spot continually, and He made the one circle outer and the other inner. And the outer motion He ordained to be the Motion of the Same, and the inner motion the Motion of the Other. And He made the Motion of the Same to be toward the right along the side, and the Motion of the Other to be toward the left along the diagonal; and He gave the sovranty to the Revolution of the Same and of the Uniform. For this alone He suffered to remain uncloven, whereas He split the inner Revolution in six places into seven unequal circles, according to each of the intervals of the double and triple intervals, three double and three triple. These two circles then He appointed to go in contrary directions; and of the seven circles into which He split the inner circle, He appointed three to revolve at an equal speed, the other four to go at speeds equal neither with each other nor with the speed of the aforesaid three, yet moving at speeds the ratios of which one to another are those of natural integers.

And when the construction of the Soul had all been completed to the satisfaction of its Constructor, then He fabricated within it all the Corporeal,and uniting them center to center He made them fit together. And the Soul, being woven throughout the Heaven every way from the center to the extremity, and enveloping it in a circle from without, and herself revolving within herself, began a divine beginning of unceasing and intelligent life lasting throughout all time. And whereas the body of the Heaven is visible, the Soul is herself invisible but partakes in reasoning and in harmony, having come into existence by the agency of the best of things intelligible and ever-existing as the best of things generated.

~Timeaus, Plato
In discussing the creation and nature of the universe, Timeaus/Plato has the demiurge set the physical world with two great circular bands, fastening them together so that they form two intersect portions on either side. It is from these two points that the World Soul gives to the material universe the phenomenon of motion, time, and life.

It's generally understood that Plato was in fact discussing the two bands of the zodiac and the ecliptic. (Although some have argued that it the ecliptic and Milky Way).

This idea extended beyond Plato, however. Similar crosses (saltire) appear throughout the ancient world:

Urania, the muse of astronomy, and the globe etched with a cross 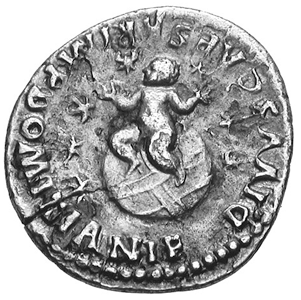 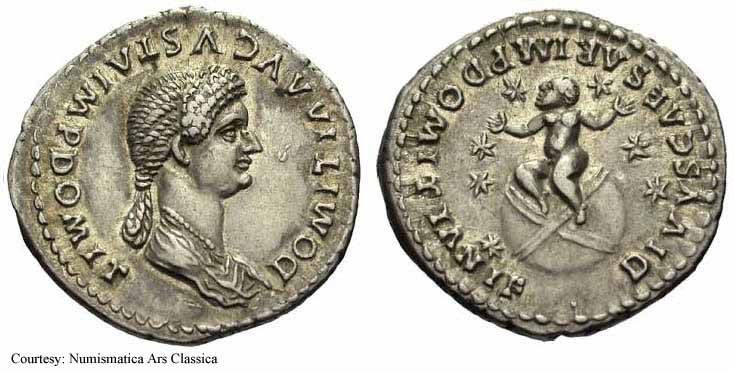 Coins minted during the reign of Domitian.His son sits on a globe etched with cross surrounded by seven stars.

The lion-headed god of Mithraism, interpreted to be the demiurge, stands upon a globe etched with a cross 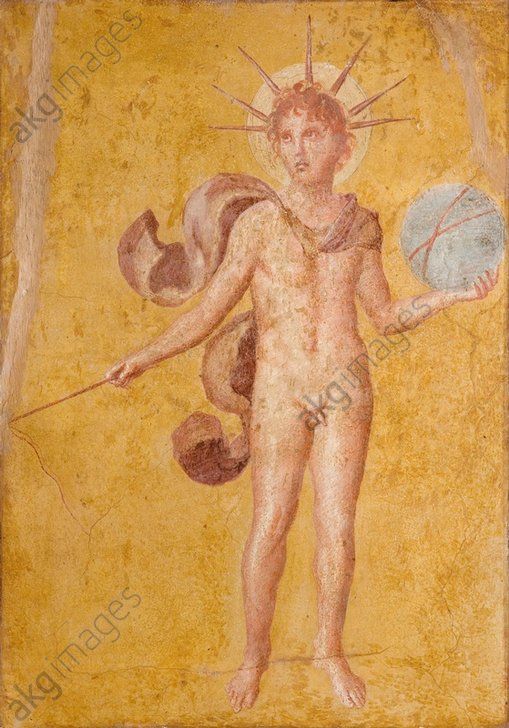 Apollo, Pompeii, holds a globe etched with a cross 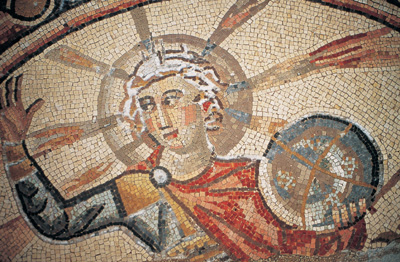 Helios holding a globe etched with a cross, from a fourth century synagogue

So it seems easy to see where certain Gnostic sects got their idea of a Heavenly/celestial cross.

He showed me a cross of light fixed, and about the cross a great multitude, not having one form: and in it was one form and one likeness. And the Lord himself I beheld above the cross, not having any shape, but only a voice: and a voice not such as was familiar to us, but one sweet and kind and truly of God, saying unto me: John, it is needful that one should hear these things from me, for I have need of one that will hear. This cross of light is sometimes called the word by me for your sakes, sometimes mind, sometimes door, sometimes a way, sometimes bread, sometimes seed, sometimes resurrection, sometimes Son, sometimes Father, sometimes Spirit, sometimes life, sometimes truth, sometimes faith, sometimes grace. And by these names it is called as toward men: but that which it is in truth, as conceived of in itself and as spoken of unto you, it is the marking-off of all things, and the firm uplifting of things fixed out of things unstable, and the harmony of wisdom, and indeed wisdom in harmony. There are of the right hand and the left, powers also, authorities, lordships and demons, workings, threatenings, wraths, devils, and the lower root whence the nature of the things that come into being proceeded. This cross, then, is that which fixed all things apart by the word, and separate off the things that are from those that are below, and then also, being one, streamed forth into all things. But this is not the cross of wood which thou wilt see when thou goest down hence.

Apocryphon of John
But a heavenly crucifixion?

It is by gods' work that they say Ixion,
fixed on his winged wheel, spun in a circle,
cries aloud ...
Zeus likewise wrought the crucifixion on the wheel,
Ixion's bane; and, spinning there,
limbs fast to the ineluctable circle 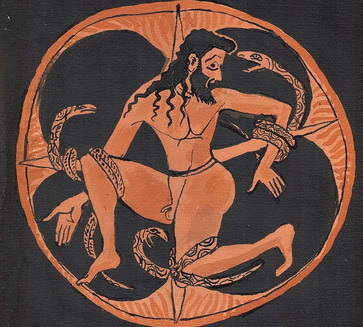 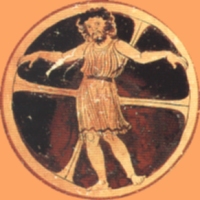 And yes, Ixion was, in some traditions, NAILED to the wheel, as Plutarch observed in his Moralia:

Now these judgments and opinions conveyed in the words (of a poet) are easy to notice for anyone who pays attention. But they (i.e. the poets) also provide lessons from the actions themselves (that they portray). Thus Euripides is said to have answered those who criticized his Ixion for being impious and impure by saying, ‘But I did not bring him off the stage before I had nailed him to the wheel.’
Niente è ingannevole o depravato come Guiseppe.
Top

It is unfortunate that this time just Joseph D.L. (notoriously, an idiot in my eyes) has said something of interesting.

"His punishment was to be crucified on a fiery wheel which revolves throughout eternity-i.e. presumably the sun; Ixion is condemned to become part of the operating mechanism of Zeus' universe."-
Dr. Alan H.Griffiths, "Ixion," in The Oxford Classical Dictionary, eds. S. Hornblower, A. Spawforth, E. Eidinow (Oxford: Oxford University Press, 2012), 770.


We see again the cosmic wheel in the Valentinian myth, also there working as «operating mechanism» of another universe, the universe of the archons and of the demiurge (the god of the Jews):

Jesus was acting on the axis of the world; he held the rudder, a kind of giant who set the world in motion.


Something as the following image (it is the best image I have found to give the idea): 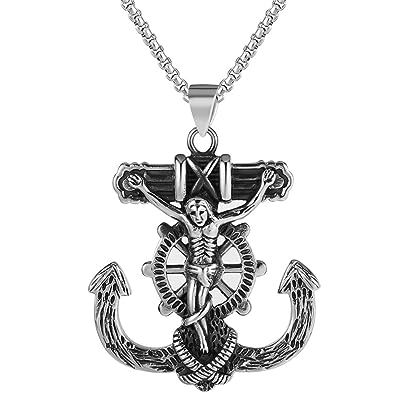 Hence, just by being crucified on that cosmic cross, extended on the entire universe («the sphere») ruled by the archons, Jesus was able to snatch the control of that same universe from the hands of the archons who ruled it until then.

A better image than that shown above, is surely the Cosmic Cross: Because that's easier than saying that Christianity is just a synthesis of Jewish and pagan ideas?

No, its because there are some uncanny similarities between jesus and his followers teachings and those of religions he almost definitely had no contact with, like maya, aztec, hopi, and some he may have had contact with like hindu, Buddhist, Taoist, etc. Also, these religions have prophecies that jesus the christ seems to fulfill just as He fulfilled jewish prophecies.

Have you read joseph Campbell? Cause the only other explanation would be the collective unconsciousness. Except there are some pronounced differences about jesus.

Anyways, you dont know me so it can be forgiven you to assume i would seek an easier path. I used to have a prejudice against christianity, and like you, look for explanations why it isnt true, like the "zeitgeist" folks who just see it as borrowing pagan myths and what not. I dont come from religious family and dont feel he need to apologize for or justify christianity. And im not simply just agreeing with apologists and taking my beliefs from them. These are the conclusions i have found through my personal search while trying to have an open mind and asking to be led by the holy spirit. I wouldnt necessarily even aay, "conclusions" because im willing to change my mind. But so far, this is what i have found. I believe the gospel of jesus christ is for all nations and so no matter the cultural background He could be understood. I believe that just as jesus christ is a type of the High Priest of the Temple, He is also the High Shaman. He is the fulfillment of philosophy as the Logos of God. He is the King of Kings for those of monarchical dependencies. And also a revolutionary and teaches those of revolutionary tendencies how best to help create social change. But not really limited to these explanations either. like Thomas says when asked by jesus what he thinks about Him, " Master, my mouth is wholly incapable of saying whom you are like."
Top

Because that's easier than saying that Christianity is just a synthesis of Jewish and pagan ideas?

I began my christian walk as a mythicist. I was ok with that, as i was more of a platonic/gnostic idealist. I dont have any axe to grind of the historicist kind.. In fact, i still value allegorical mythicist interpretations and didnt base my faith and salvation on historicist interpretations. It wasnt until fairly recently that ive come to see through a more orthodox lens(though any who call themselves orthodox might say im a heretic). Im not a member of any organization or denominations, like RCC, eastern orthodox, protestant of any kind. Im just telling you that so you know i have no particular axe to grind and try to be open to Truth.

That said, my impression of a lot of so called scholars here and elsewhere, is they have a particular axe to grind, and seek for evidence to prove their existing beliefs. If they're a member of a certain sect its to prove that, if they're anti christian they are often looking for evidence to prove christianity wrong. I think there are very few scholars actually seeking the truth rather than prove a point.
Top

theeternaliam wrote: ↑
Sun Sep 08, 2019 12:24 pm
That said, my impression of a lot of so called scholars here and elsewhere, is they have a particular axe to grind, and seek for evidence to prove their existing beliefs. 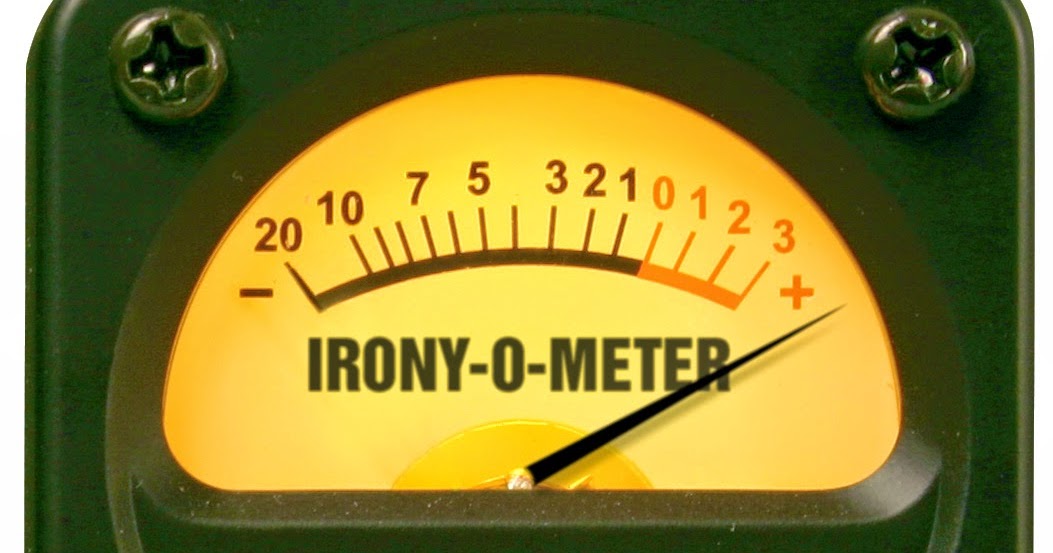 theeternaliam wrote: ↑
Sun Sep 08, 2019 12:24 pm
That said, my impression of a lot of so called scholars here and elsewhere, is they have a particular axe to grind, and seek for evidence to prove their existing beliefs.

I dont think i said that the way i wanted to say it but i think you get what i mean. Basically, confirmation bias. People believe what they want to believe then find evidence to support beliefs and ignore evidence that doesnt. Its few and far between who are actually open minded when it comes to religion or politics
Top
Post Reply
8 posts • Page 1 of 1