Joseph D. L. wrote: ↑
Sun Nov 10, 2019 5:09 am
It doesn't get any more blatent then that, Giuseppe. Paul is unambiguously implying Philo's concept of the dichotomy of Genesis, chapters 1 and 2.

you are talking with one who accepts the traditional reading of Paul, sorry.


What proof do you have that he hated YHWH? From everything I've found it seems that he merely relegated him to a lower position to an even higher god, that he was a just god as a opposed to the merciful Good God.

I can easily quote the words of the Father of Church X to make the point that Marcion hated YHWH, but I will quote Luke 6:43-45:
"For a good tree bringeth not forth corrupt fruit; neither doth a corrupt tree bring forth good fruit. For every tree is known by his own fruit. For of thorns men do not gather figs, nor of a bramble bush gather they grapes. A good man out of the good treasure of his heart bringeth forth that which is good; and an evil man out of the evil treasure of his heart bringeth forth that which is evil: for of the abundance of the heart his mouth speaketh."
two trees allegorizes two gods. YHWH is a bastard god because the his creation is evil.
This is dualism, not ditheism, sorry.

in our narratives as they stand now, there is no way by which Barabbas can be rehabilitated from a moral point of view, or by seeing him as a recipient of a god who escapes the death in a disguised form. He is clearly execrated as bastard and criminal.

and so you can't imagine that a good Jesus is disguised behind the visibly bastard Barabbas.


According to you Marcion thought that YHWH was yet Jews worship him anyway. Don't project your own expectations onto the texts.

in the original narrative there was only Jesus Son of Father before Pilate. And the Jewish crowd cried : "Kill him!" Not : "release him!". Trace of this cry you can hear still in GPeter.

And that applies just as easily to the Jewish Gospel, wherein Jesus's father was unknown.

no, in a Jewish gospel the Jews know that the father of Jesus is Joseph, not YHWH.

And YHWH can't be an unknown god. The Romans respected YHWH just because he was not a new deity. He was known from the day 8 of the his creation.


And I've tried looking into your definition and so far the only things coming up are questionable.

the price you pay to question my conclusion is to have a view about Marcion that is virtually marginalized/ignored/denied by all the scholars living on the planet Earth. Even the author of this book:

...denies that Marcion was a ditheist.


The Unknown Father of the Jesus of Marcion.

If anything, Barabbas could be a mocking allegory for bar Kochba. At least he is more fitting of the role.

the father of Bar Kokhba was known. He was not a bastard.


But Marcion's Christ wasn't a thief or a murderer, so how does that apply to him?

the Jesus who calls himself "Son of Father" in Proto-John accused the OT prophets of being robbers and thiefs.

All who have come before me are thieves and robbers
(John 10:8)

And Tertullian accused the marcionite Christ of being a thief of the property of the creator.

And you still refuse to acknowledge Pilate's own sympathy for handing Christ over to the Jews. That blows whatever claim you make about it out of the water.

In the original narrative Pilate could be innocent. I don't know. But the Jews are not. They cried: "Kill Jesus the Son of God". And Pilate conceded them Jesus.
Nihil enim in speciem fallacius est quam prava religio. -Liv. xxxix. 16.
Top

Giuseppe wrote: ↑
Sun Nov 10, 2019 6:14 am
Obviously, Joseph D. L. has totally failed to confute the DEFINITIVE evidence that Barabbas is a judaizing parody of the proto-marcionite Christ.

Whereas you have failed to provide definitive evidence as opposed to someone's tenuous definition of Bar-Abbas and your presupposed interpretation.

I have no interest in following this thread any further as you have shown yourself to be utterly incapable of either civil discourse or providing "definitive" evidence, or any evidence other than baseless conjectures you take to be absolute.

I am thankful that no one here takes this fool seriously and see him as a joke.
Top

I insist: Joseph D. L. has totally failed to confute the DEFINITIVE evidence that Barabbas is a judaizing parody of the proto-marcionite Christ.


Joseph D. L. wrote: ↑
Sun Nov 10, 2019 11:06 pm
I have no interest in following this thread any further as you have shown yourself to be utterly incapable of either civil discourse or providing "definitive" evidence, or any evidence other than baseless conjectures you take to be absolute.

this your reaction is expected per the Aesopian fable about the fox and the grapes.

I am thankful that no one here takes this fool seriously and see him as a joke.

That silence is strongly expected by who is totally embarrassed by the corollary of this great finding in the field of the Gospel exegesis.

That the Barabbas Episode shows, already by the time of GMark, the existence of rival Christians there out who denied strongly and zealously that Jesus was the son and the messiah of the bastard demiurge.

And note, idiot of a Joseph D.L., that the intrinsic beauty of this thesis is that it is Falsifiable (as any rational thesis). If you want to confute this my view, then you should give simply evidence of a rival sect distinct from the Marcionite sect (and precursors or derived) where a Jesus was adored as Son of Father and where the his being called NOT the Jewish Christ was someway disturbing for "Mark" (author).

If you show me that:
Only then you would have succeed to confute me. But you are totally unable to do so, because you don't even realize this last point. You are essentially a modern Judaizer of old de-ethnicizers. I don't talk with ideologues. End of a "discussion" that never really started.
Nihil enim in speciem fallacius est quam prava religio. -Liv. xxxix. 16.
Top

It seems that the Gospel Jesus did not preach the fatherhood of God. Thus, 44 passages are found in Matthew's gospel where Jesus speaks of God as his Father, but these passages are reduced to 4 in Mark's gospel before him. The expression "My Father" is not found in Mark, whereas it is found 16 times in Matthew.

Now, it will be observed that these expressions God and Father and God the Father are absent from the Gospels and are found only in the Pauline Epistles, that is, where the meaning of the texts had to be corrected according to the evolution of the faith.

It is evident that all this betrayes a particular insistence on the claim that the Father of Jesus had to be who was considered the supreme god (i.e. YHWH).

The evolution of the texts is the following:

In line with what I have written above, now this is interesting:

In Matthew 20:20 and Mark 10:35, the apostles James and John ask Jesus to sit one on his right hand, the other on his left when he is in his Glory or in his Kingdom. They do not doubt that, since Jesus will sit at the right hand of the Father, then the seat on his left will not be free, but they may not know that Jesus has a heavenly Father.

Was that a deliberate irony ? Or the usual polemic against JESUS SON OF FATHER ("Bar-Abbas"), notoriously having only ONE seat to give to his left: for his celestial Father.

I think that, being the baptism of Jesus happened in Sheol (="Capernaum"), then the Pillars are asking that they will receive the baptism of Death, i.e. they will go to Sheol.
Nihil enim in speciem fallacius est quam prava religio. -Liv. xxxix. 16.
Top

Another evidence of a polemic in action against the Marcion's Jesus Son of Father ('Bar-Abbas'):

Clearly, the author means to fix two points: Both the 2 points are in deliberate polemic against the "Jesus Son of Father" ('Jesus Bar-Abbas') who proclaimed: …and against the Jesus who had no reluctance at all to drink fully from the "cup" of human sufferings:
No wonder that the greatest punition that a "Bar-Abbas" would have received by a Judaizer, was not to die (that is equivalent to: not drink from the cup).
Nihil enim in speciem fallacius est quam prava religio. -Liv. xxxix. 16.
Top

There are two kinds of mythicists.

The first kind of mythicists follow the logic of Rousseau (even if Rousseau was strongly historicist):

If Jesus never existed, then the first evangelist was a Genius.

Hence their efforts are designed to describe Mark as a Genius, a great Artist, author of a great work of midrashical art etc, too much perfect to reflect a historical man etc. I count Neil Godfrey, Nanine Charbonnel, Thomas Brodie, among these mythicists.

But then there are the Mythicists who don't consider geniuses the evangelists, but mere war propagandists. I am among them.The Gospels were mere polemical propaganda. If there is art in them, it is only to make polemical propaganda, again and again. For example, a rival Jesus Son of Father is reduced to be a mere robber "Bar-Abbas". Just as a a famous heretic is reduced to a porcus Saxonicus in the following picture:

Irony of the History.

The Christian adorers of YHWH as supreme god reduced a rival "Jesus Son of Unknown Father" to a mere terrorist named "Jesus Bar-Abbas". It is called: parody.

2000 years after, some atheists and anti-theists reduced YHWH to a mere terrorist, in a satyrical image: 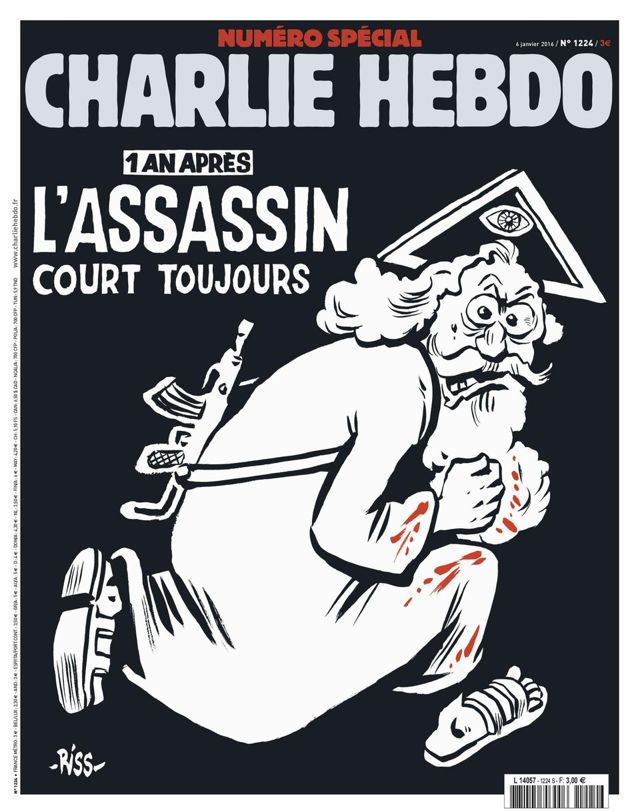 That also is called a parody.

And what is even more ironical: both the reduced terrorists are portrayed as escaping.
Nihil enim in speciem fallacius est quam prava religio. -Liv. xxxix. 16.
Top
Post Reply
29 posts