How much is it possible as a mere coincidence, that the separationist idea, born independently from the Gospels, would find a quasi natural application in a verse based very probably on the Psalm 22?

Best answer: it is not a coincidence.

Two possibilities:
My suspectous nature leads me to incline dangerously towards the first possibility.

The coincidence-that-is-not-a-coincidence says us that "Mark" had wanted to judaize Gnostic concepts by showing them as midrash from Jewish scriptures.

But the coincidence-that-is-not-a-coincidence can't say us if "Mark" worked so against the Gnostics or being himself secretly a Gnostic.

The same problem is raised by the author of this meme: 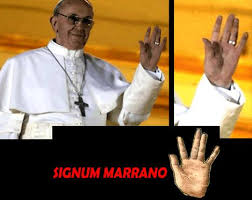 In this case, is Bergoglio addressing only the insiders?

Or is he christianizing a Masonic simbology against Masons?

Or is it only a mere coincidence?

In the Gospel case, this couldn't be a mere coincidence, for the three facts above.
Nihil enim in speciem fallacius est quam prava religio. -Liv. xxxix. 16.
Top
Post Reply
2 posts • Page 1 of 1