Yogi-Sim: What DO they believe, indeed!

What do they believe? What do you think? Talk about religion as it exists today.
Post Reply
2 posts • Page 1 of 1

Yogi-Sim: What DO they believe, indeed!

Told him it sounded like self hypnotism to me and he said what of it . . . didn't care if it was yogi-sim, self-hypnotism, or anything else . . . four, of them were well. But it's so damn hypocritical . . . I get beat every other way and then I turn around and lay it in God’s lap . . . damned if I ever would turn to God . . . what a low-down, cowardly, despicable trick that would be . . . don’t believe in God anyway . . . just a lot of hooey to keep the masses in subjugation . . . world’s worst inquisitions have been practiced in His name . . . and he said . . . do I have to turn into an inquisitionist . . . if I don’t knuckle down, I die . . . why the low-down missionary . . . what a bastardly screw to put on a person . . . a witch burner, that’s what he is . . . the hell with him and all his damn theories . . . witch burner.
Yogi-sim is an extraordinary term for someone to introduce into a corporate American's stream-of-consciousness rant c.1935. However, it is exactly the kind of term a Hindu specialist like Heinrich Zimmer might use to explain the 'bondage' of the yogi or a Judeo-Egyptian Therapeut (Servant of God); an elite philosopher might well know this. Where "the only effort necessary is following a few simple rules" yogi-sim is opposite "the Bondage of Self". Developing a Therapeutic cult, this idea further suggests a belief that Judeo-Buddhism may have existed in Egypt, after Ashoka, as one influence on Philo's Judaic philosophers. What the hey?! This general topic has been raised here previously.

Consider "yogi-sim" from an essay in a Theosophist journal 1886:
It is not within the scope of the present paper to enter into details, but any Sanskrit scholar can do so for himself, following the line of inquiry here indicated. Siva on the top is the Pratyagatma or Turiya consciousness, which is the same as Paramatma. The ten arms of the goddess are the ten Mahavidyas or rays of spiritual wisdom spoken of in the Tantras, the same as the ten forms or murtis of Krishna mentioned in the Gopala Tapani Upanishad, Pt. II. The eleventh is Turiya whom none can worship. For it is the union of the worshipper and the worshipped. The Asura is the whole power of illusion born of buffalo, the vehicle of Yama the Law, and thus the symbol of the evolutionary energy, avidya, which perpetuates bondage. The lion is the same as Brahma Vidya. The Sanskrit word for a lion is simha. As Sri Sankarachàrya explains in his commentaries the Nrisimhapani Upanishad, sim means bondage and ha the destroyer. Although the present paper is meant to be suggestive and by no means exhaustive, there is a deep lesson taught by our tutelary goddess which cannot be overlooked. After fighting for ages with the asura, the goddess was told by him that any boon she might ask him would be granted. She consented to do so on condition that he should accept a boon from her. As a result the goddess placed her left foot on his shoulder and he became her vehicle; and she ordained that whoever worshipped her as she then was would attain liberation. Plainly stated it means there is no wisdom but the right perception of illusion, and when that is developed both disappear, and Nirvana is—what it is. It is like the multiplication of a fraction by its reciprocal which leaves unity. Vidya and Avidya are but the positive and negative aspects of the Brahma Vidya or Máya in its highest aspect of Maya, which from a different point of view is the same as átmá. The character of the Asura's aspect is shown by the negative foot being placed upon him.
Of course, that passage evokes the image of Jacob wrestling with the Angel, to be blessed as 'Israel': Genesis 32:22–32. But Gymnosophists were linked more directly to the Therapeutae by G.R.S. Mead [1901], p.99-106:
THE GYMNOSOPHISTS OF UPPER EGYPT.

We now come to Apollonius' visit to the 'Gymnosophists' in 'Ethiopia,' which, though the artistic and literary goal of Apollonius' journey in Egypt as elaborated by Philostratus, is only a single incident in the real history of the unrecorded life of our mysterious philosopher in that ancient land.

Had Philostratus devoted a chapter or two to the nature of the practices, discipline, and doctrines of the innumerable ascetic and mystic communities that honeycombed Egypt and adjacent lands in those days, he would have earned the boundless gratitude of students of the origins. But of all this he has no word ... Who then were these mysterious "Gymnosophists,” as they are usually called, and whence their name? Damis calls them simply the “Naked” (γυμνοὶ), and it is very clear that the term is not to be understood as merely physically naked; indeed, neither to the Indians nor to these ascetics of uppermost Egypt can the term be applied with appropriateness in its purely physical meaning, as is apparent from the descriptions of Damis and Philostratus. A chance sentence that falls from the lips of one of these ascetics, in giving the story of his life, affords us a clue to the real meaning of the term. “At the age of fourteen,” he tells Apollonius, “I resigned my patrimony to those who desired such things, and naked I sought the Naked” (6.16).*

* The word γυμνός (naked), however, usually means lightly clad, as, for instance, when a man is said to plough 'naked,' that is with only one garment, and this is evident from the comparison made between the costume of the Gymnosophists and that of people in the hot weather at Athens (6.6).

This is the very same diction that Philo uses about the Therapeut communities, which he declares were very numerous in every province of Egypt and scattered in all lands. We are not, however, to suppose that these communities were all of the same nature. It is true that Philo tries to make out that the most pious and the chief of all of them was his particular community on the southern shore of Lake Moeris, which was strongly Semitic if not orthodoxly Jewish; and for Philo any community with a Jewish atmosphere must naturally have been the best. The peculiarity and main interest of our community, which was at the other end of the land above the cataracts, was that it had had some remote connection with India.

The community is called a φροντιστήριον, in the sense of a place for meditation, a term used by ecclesiastical writers for a monastery, but best known to classical students from the humorous use made of it by Aristophanes, who in The Clouds calls the school of Socrates, a phrontistērion or thinking shop.” The collection of monasteria (Ιερά), presumably caves, shrines, or cells,* was situated on a hill or rising ground not far from the Nile. They were all separated from one another, dotted about the hill, and ingeniously arranged. There was hardly a tree in the place, with the exception of a single group of palms, under whose shade they held their general meetings (6.6).

* For they had neither huts nor houses, but lived in the open air.

It is difficult to gather from the set speeches, put into the mouths of the head of the community and Apollonius (6.10-13,18-22), any precise details as to the mode of life of these ascetics, beyond the general indications of an existence of great toil and physical hardship, which they considered the only means of gaining wisdom. What the nature of their cult was, if they had one, we are not told, except that at midday the Naked retired to their monasteria (6.14). 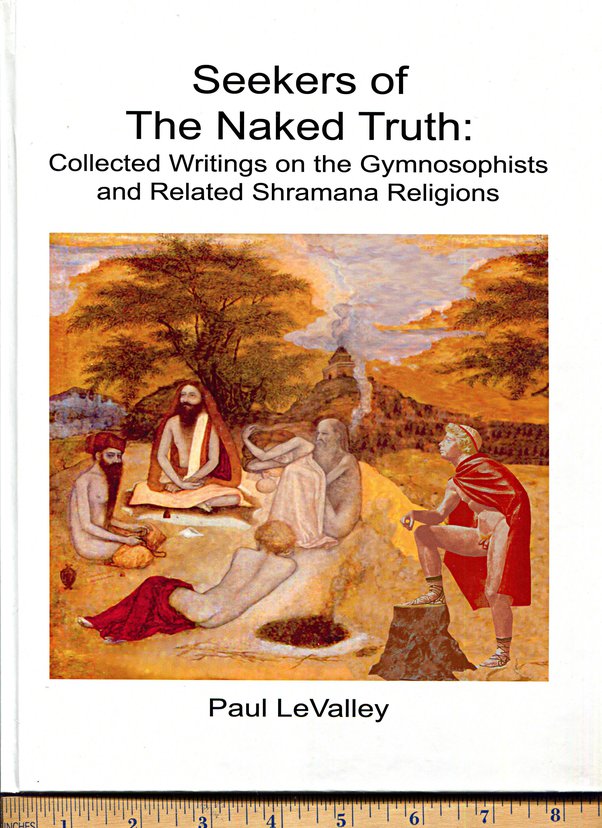 Re: Yogi-Sim: What DO they believe, indeed!

The short and simple explanation for why people practice religion is that they communicate with God, or whatever incarnation they believe God to take, and they see signs of its presence in the world. Click Here
Top
Post Reply
2 posts • Page 1 of 1