What is the earliest date attesting to this Graeco-Egyptian god? I see papyri evidence c.145 BC but perhaps the Greek variant may be c.300 BC (Egyptian Khnum/Chnemu is obviously older).

Chnoubis was the Nile god of Elephantine and those Chaldean Jews had an adjacent Temple worshipping Yahu (same-same?) c. 410 BC. Ialdabaoth is the Jewish name for Chnoubis, who was also called Agathodaimon in Alexandria. We have been led to believe Ialdabaoth 'apppears' in the 2nd C AD - that is misinformation. The association of Yahu-Chnemu was obviously hundreds of years before that, but what's intriguing is the Jewish adaptation.

p.61-
Chnoubis/Chnoumis was one of the 36 Egyptian Decans, each of which occupied 10 degrees of the Zodiac. His image consists of two elements: a snake's body and a lion's head emanating rays. A similar god was raised to the status of supreme deity by doctrinal circles close to Gnosticism. The idea that the supreme god had the form of a lion and a snake was, as we have seen, held by gnosticizing non-Christian magi, who invoked him with the words: “Hail, Serpent, indomitable Lion”

In their passionate quest for the true image of the Hebrew god, Bible scholars must have noticed that the word YHWH resembled the Aramaic HYWAH, ‘animal’. There are traces of this thinking in Gnostic treatises (i.e. Origin of the World (NHC II,5) 114; 119; Origen, Cels. VI 30, etc.) in which the Hebrew god, Ialdabaoth, together with the other Archons of the planetary spheres, had the form of an animal, especially that of a lion. It was widely believed by Gnostics that the Kosmokrator, the Lord of the World, had the form of a snake. In the Apocryphon of John (NHC II,1; III,I; IV,1; BG 8502,2,10) we read that Ialdabaoth “had the form of a dragon, the face of a lion with fiery eyes darting lightning and flames ... and (Sophia) wrapped him in a shining cloud...”. This corresponds exactly to a description of Chnoubis, as does that of the indomitable Lion-Serpent, to whom however prayers were offered.

* Encyclopaedia of Islam, p.3 (edit. K. Fleet, et al.): “In the Hellenistic period, Agathodaimon became the patron god of Alexandria and was often portrayed as a serpent. The Egyptian writer Manetho (third century B.C.E.) named him among the old kings of his country. Agathodaimon also became a prominent figure in the half-philosophical, half-religious literature of Hermeticism that had its origins in Egypt…”

p.63:
The image of Chnoubis, the serpent with a lion's head emanating rays, was reproduced over and over again on emerald-green stones. Chnoubis was certainly one of the figures most often seen on magical gems. The rays encircling his head have always been considered proof that Chnoubis was a sun-god. This has a positive connotation, evoking the luminous nature of the Gnostic and astrological god of the pole, who had the form of a snake or a lion.

p.64-5: Another problem is posed by recurring inscriptions describing Chnoubis as the conqueror of giants… In a complex ‘Hebrew’ exorcism performed in the name of the Hebrew God, attributed to the Egyptian magus Pibechis, the Hebrew god Sabaoth is invoked and hailed as ‘he who destroyed the giants with lightning’. Several parts of this text are inspired by Rabbinic tradition, confirming how deeply rooted the theme of giants and of Chnoubis gigantorekta was in Judaic doctrine. … The identification of Chnoubis with the Hebrew god explains the title ‘he who broke (or stifled) the giants’: the divinity of Elephantine, Chnum, was the god who brought the Nile flood, who ruled over water and all liquid elements, and therefore had also sent the Flood. The Bible frequently mentions Yahweh's dominion over the waters, [p.66] particularly the Red Sea and the Nile.

One of the oldest beliefs - found in Enochic literature - on which Gnostic doctrine is based has its origin in an interpretation of a passage in Genesis 6.4, which tells the story of the angels [and Nephilim]… The myth of the birth of the giants and their destruction by God flourished to an extraordinary degree in late-Hellenic Judaic literature (especially in the books of Enoch)…

The biblical episode was of fundamental importance in the development of Gnosticism, because it showed the Lord repenting of his creation and willing to save only the few spiritual men, the chosen ones. … we will only focus on the variation which states that the destroyer of giants was the god with the form of a snake. As we have read in the passage from lrenaeus describing Ophitic doctrine, in which the heresiologist asserts that the serpent, son of Ialdabaoth , but also an instrument of the divine Mother, [p.67] introduced Adam and Eve to gnosis in the Garden of Eden, so that Ialdabaoth was angered and drove out the first men and also the serpent: "Sed et Serpentem adversus Patrem operantem deiectum ab eo in deorsum mundum. In potestatem autem suam redigentem Angelos qui hie sunt ... " Having been hurled by Ialdabaoth down to earth, the serpent therefore subjugated the angels who were there. In the Ophite myth the Serpent surrounded himself with demons, his children, and caused harm to humankind. He was, therefore, the Devil, according to lrenaeus. In the speculations of Hebraizing magi sympathetic to Ophite ideas and worshippers of Chnoubis, the repentant creator of the Bible became the serpent that ‘broke and stifled’ the giants, who were the angels' children. In Gnostic texts the serpent is the creator's disobedient son, while in Judea-Egyptian doctrine Chnoubis is the creator himself, who sent the Flood to destroy the whole of creation, except for the few righteous men, by water.
…
Christianization […] clashed with Jewish thinking and the ideas of peoples influenced by Judaism who revered the Lion-Serpent as a manifestation of the Hebrew god. Christian Gnosticism identified Chnoubis with the devil, the Beast of the Apocalypse, whereas doctrines similar to Gnosticism which remained faithful to Egyptian Judaism continued to revere that divinity.
Independently, we know that Philo's "radical allegorizers" are (Gnostic) intellectuals/writers among heterodox Judaic groups later called Ophite, Sethian, Cainite, etc. We don't know where in the Diaspora these dissident came from, but we can assume these are renegade Jewish communities outside of Roman Palestine by the First C. BC. Jewish gnostics were already seeking salvation from a wicked Demiurge, hoping for the Christos. Obviously, not every Jew envisioned the Creator-Logos this negatively; Philo tried to explain a sensible middle-way.

A few important takeaways:
1) For allegorizers, Yahu-Chnemu (c.400 BC) later became (c.50 BC) the Cosmocrator Ialdabaoth, his 'son' is the Serpent Sabaoth, etc. in Judeo-Egyptian folklore and such radical/heretical communities beyond the control of 'Jewish authorities.'
2) Ialdabaoth/Agathodaimon ('Jewish') worship at pagan temples seems entirely plausible. Heterodox Judaism probably took many forms we cannot imagine (assuming the LXX was Law and obeyed), largely censored from history.
3) Xians repudiated all this, and presumably early on. Ialdabaoth was defined as satanic; Jewish religious authorities probably initiated that, for even in Philo's day (c.25 AD) such radical allegorizers were anathematized.

Obviously, there is much in Mastrocinque's book to prove that 'Ophites didn't just appear' and 'Gnosticism wasn't new' in the First C. AD. 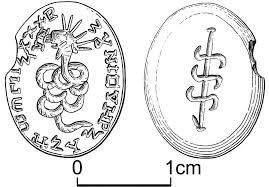