Link
However, according to Arrian, drawing from a source as early as Ptolemy I, Alexander could count on local, supernatural help which had not showed up at the time of his mythical predecessors: he was led to the oasis of Siwah by two benevolent, talking snakes, possibly an hypostasis of the Egyptian gods Psois and Thermuthis
(Arrian, The Anabasis of Alexander, 3.3.5):41

... consequently, Alexander’s army lost the way, as even the guides were in doubt about the course to take. Ptolemy, son of Lagus, says that two serpents went in front of the army, uttering a voice, and Alexander ordered the guides to follow them, trusting in the divine portent. He says too that they showed the way to the oracle and back again. (Transl. E. J. Chinnock).
Semitic gods Gad and Meni may correspond to serpent-gods Shai and Renenutet. (Thermuthis is probably the younger feminine form.) Seen in this Sphinx/Horon example, the vulture-headed griffin may represent a Chaldaean symbol of Ninurta/Ninĝirsu in Egypt and emblem of Horus guarding the body of Osiris (also: Alexander the Great in Egypt; Lady of Heaven). 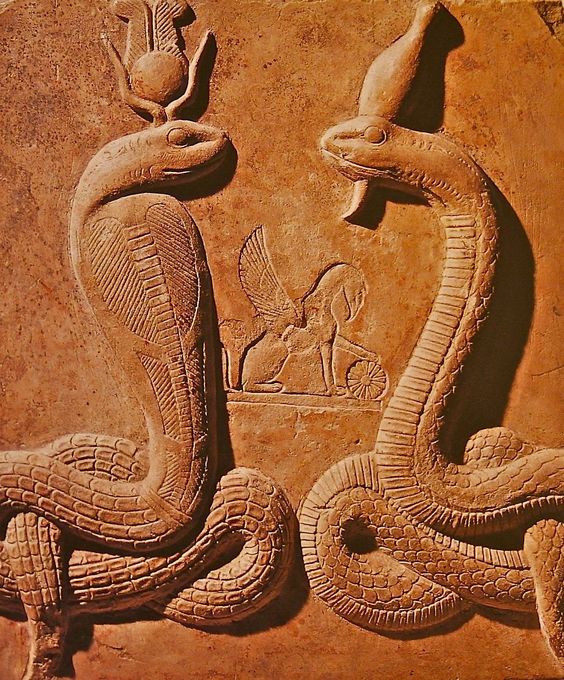 Renenutet/Thermuthis was the nurse of the divine Egyptian king; 'Eve giving to suck' (Seth?); Thermuthis suckling Harpocrates; Thermuthis as Pharaoh's daughter/nurse of Moses. Is the same deity Astarte Palaestina, also known as Aphrodite Ourania (Astoreth)? One minor question is if "Palestinian Astarte, Aphrodite of the Heavens" (Celestial Aphrodite, etc.; see Delos) should be the Queen of Heaven (i.e. Anat) or rather her Daughter, a lesser/younger form. This was a moot distinction where the Pharaoh sometimes married his own female child, i.e. Ramesses II and Bintanath, but we have good reasons to believe there were two female deities (both a senior and junior), the nebty -- the Holy Mother and the Holy Whore -- at Alexandria. 'Aphrodite' was definitely associated with Adonis, at Alexandria/Egypt. 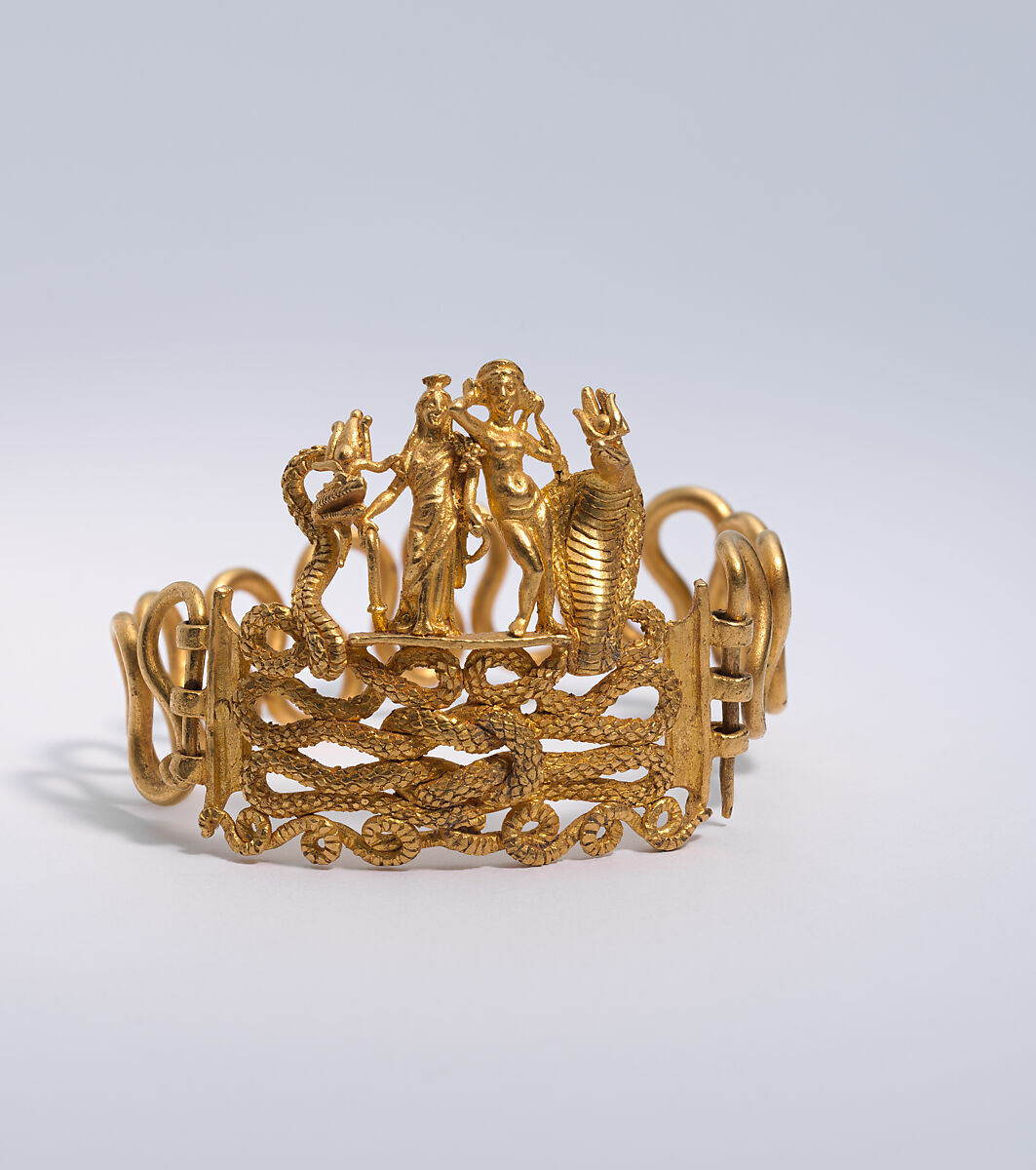 I don't think these two serpents are the male consorts of the female goddesses; this gold bracelet may be showing the two goddesses (Isis-Tyche and Aphrodite-Hathor) in two forms, one serpentine.

Eventually Renenutet was identified as an alternate form of Wadjet, where the Serpent at the right should be the the Eye of Ra? As Wadjet, the patron goddess of Lower Egypt, 'Aphrodite' appears with her matronly sister Nekhbet (representing Upper Egypt) or Renenutet. Wadjet is typically described as an agressive deity and associated w/ Seth. The Hỉw-Serpent was associated w/ the God Seth.

If Horon was once a cavalry god (Cumont?), so too Astarte is "Mistress of Horses, Lady of the Chariot". If Horon is Lucifer, so Venus-Aphrodite (Astarte) is associated with the Morningstar. Also, Agathe Tyche became Isis, so Agathodaimon (Shai) would be Osiris, later Serapis. It is plausible to see Horon -- a dual-natured Destroyer-Savior god -- conflated w/ Osiris or his nemesis Seth. Perhaps Horon, Savior from Snake-Poison, was conflated w/ a salvific Snake-God? This mythos is unclear.

There was a mention somewhere by a Jewish(?) scholar speculating that Judeo-Egyptians venerated two serpents, of Good and Bad Fortune. I have not yet been able to recover this citation. It is related to this. See Joachim Schaper, "Pagan Deities and Religious Concepts in the Old Greek of Isaiah," in Genesis, Isaiah and Psalms. A Festschrift to honour Professor John Emerton for his eightieth birthday. Series: Vetus Testamentum, Supplements, Volume: 135 [2010], pp.139-40:
It seems that Gad, who was a 'deity of good luck',17 was venerated together with Meni, who also was “credited with the ability to determine Destiny (AkkGE. 222–223; WbMyth. 1/I 592; Sperling 1981:16–17). S. D. Sperling is able to demonstrate that Gad and Meni are here seen as rivals to YHWH, since “the verb בזע is regularly employed in contexts where Israel leaves Yahweh for other gods (Judg 2.12, 13; 10:6; 1 Sam 8:8), as is the verb XXX ... (Deut 8:14; Jer 13:25; Hos 2:15)”. The scene portrayed in Isa. 65 is that of a banquet for the deities; those who entertain Gad and Meni instead of supporting the cult of YHWH are denounced. [...]

But as for you who forsake me and forget my holy mountain, and prepare a table for the demon and fill a mixed drink for Fortune, I will deliver you over to the dagger; all of you shall fall by slaughter; because I called you and you did not answer, I spoke and you misheard, and you did what was evil before me and chose the things I did not desire.

The Greek translation is, on the whole, not surprising, but the rendering of the names of the deities Gad and Meni deserves attention. Daimon renders Gad; Tyche is employed as the equivalent of Meni. This translation is not arbitrary, but rather a “daring contemporization” of the original reference to the Semitic deities Gad and Meni found in the MT, and its reference points are not abstract concepts of a demon or of Fate/Fortune (as NETS renders it) but distinct deities worshipped in Alexandria (so correctly in Septuaginta Deutsch), as we shall soon see.

In Seeligmann's view Daimon refers to the Agathodaimon of Alexandrian religious practice, and Tyche to the goddess Tyche universally worshipped in the Hellenistic world. G.J. Riley does not share Seeligmann's opinion. Rather, he thinks that, “[a]s the gods of the nations were demonized, so 'demon' in the dualistic sense is found in the Septuagint... as a designation of pagan deities and spirits” and he adduces Deut 32:17, Psa 95:5, Psa 105:37 LXX, Bar 4:7 and Isa 65:11 in support of his thesis. Interestingly, he traces the concept of table fellowship with YHWH, as contrasted with table fellowship with demons, into the New Testament, where it plays an important role in 1 Cor 10:20–21.24 We shall come back to that later.

Seeligmann claims that the use of ∆αίμων and Tύχη is considerably more specific than Riley's view suggests. As indicated above, Seeligmann thinks that ∆αίμων actually refers to the Ἀγαθὸς ∆αίμων of the Alexandrian tradition, a deity that was of utmost importance to the city. The importance of this deity and its sanctuary to the Alexandrian population even in the fourth century A.D. (!) is indicated by the remarks of Ammianus Marcellinus (22.11.7). Writing about Bishop Georgius, Ammianus Marcellinus remarks:

To these evil deeds he added still another, which soon after drove him headlong to destruction. As he was returning from the emperor's court and passed by the splendid temple of the Genius [speciosum Genii templum], attended as usual by a large crowd, he turned his eyes straight at the temple, and said: “How long shall this tomb [sepulcrum] stand?” On hearing this, many were struck as if by a thunderbolt, and fearing that he might try to overthrow that building also, they devised secret plots to destroy him in whatever way they could.
So: the Hero (Serpent) Temple which Alexander reportedly destroyed was the "Heroön" of Herem/Horon, but another serpent temple was rebuilt, still existed? This would also suggest at least two serpents cults existed in Alexandria.
This temple of Agathos Daimon, the protective hero or Genius of Alexandria, is attested as late as 361 AD (Amm. xxii 11.7: speciosum Genii templum. Calderini s.v. Ἀλεξάνδρεια: Ἀγαθοῦ δαίμονος τέμενος).
Gad and Meni were two gods of Fortune and Fate.

The eponymical name of one of the ancient Hebrew tribes was Gād . Isaiah 65:11 mentions Gād as a pagan deity. There were such ancient personal Hebrew names as Gadixel ('Gad my god') and yAzgad ('mighty Gad'). The name must be Canaanite in origin: when the Hebrews under the leadership of Joshua entered Canaan, there were here such towns as Bayal-Gad and Migdal-Gad. [...] Syrian Gado was the god of good luck and the spirit of home, bestowing prosperity; this must be the same serpent-god who had been regarded as the patron of the home. In Canaan, the underworld god Baal was also referred to as Baal-Gad.
Link:
The Hellenistic cults of Tyche and Daimon are clearly meant here.75 Gad, the Jewish 'deity of good luck',76 represents Tyche, a literal feast to the riches of fortune. At Greek banquets, toasts before drinking mixed wine were raised 'to the Good Daimon',77 here represented by the Hebrew word for Destiny, ינמ(meni).78
Gad translated as 'troop' is intriguing. Gad is first mentioned in Genesis 30:11 when "Leah said, "A troop comes!" The word Troop would associate Gad w/ the Semitic mercenaries worshipping Horon and the Hermetic Troop (τάξις) invoked as a celestial (Sethian) army before the Jewish Thanksgiving Prayer (CH 1.26).

From an amateur website, the somewhat heretical but intelligent Neos Alexandria is a cool tradition and the Bibliotecha Alexandrina, which seems well-informed and documented but conflates these particulars:
We have letters from high-ranking Jewish citizens to the dioketes or Administrative Office in Alexandria as well as dedications of synagogues which mention participating in ceremonies for the deified Ptolemies and the other Gods including Zeus, Gaia and Helios (CPJ 1:125-6; 2.1440; 1: 690).
[...]
Cleodemus claimed that two sons of Abraham accompanied Herakles in his expedition through Africa, and that the divine hero even married one of their daughters.
A myth of two Jews accompanying (deity) Herakles to Libya evokes the two auspicious serpents leading (deified) Alexander.