Walter Scott, Hermetica: the Ancient Greek and Latin Writings Which Contain Religious or Philosophic Teachings Ascribed to Hermes Trismegistus, Vol.2 [1925], p.67:
Philo’s hypostatization of the δυνάμεις {=Powers} is an instance of a mode of thought which was common among the Jews of his time. There are traces in the New Testament of a tendency to hypostatize the δύναμις θεοῦ {Power of God} ; e.g. 1 Cor. 1.24: Χριστὸν θεοῦ δύναμιν καὶ θεοῦ σοφίαν {Christ, Power of God and Wisdom of God}. Luke 1:35 : δύναμις “Ὑψίστου ἐπισκιάσει σοι {the Power of the Most High will overshadow you} (where δύναμις Ὑψίστου {Power of the Most High} stands in parallelism with πνεῦμα ἅγιον {Holy Spirit}). Luke 22:69: ἔσται ὃ υἱὸς τοῦ ἀνθρώπου καθήμενος ἐκ δεξιῶν τῆς δυνάμεως τοῦ θεοῦ. In Ephesians 1:21 (ὑπεράνω πάσης ἀρχῆς καὶ ἐξουσίας καὶ δυνάμεως καὶ κυριότητος = ), the δυνάμεις {Powers} are persons. Simon Magus called himself μεγάλη δύναμις {Great Power}, probably meaning thereby that in him the divine νοῦς {Nous} or λόγος {Logos} had ‘become flesh’, Simon, as reported by Hippolytus, spoke also of subordinate δυνάμεις {powers}, which he distinguished from ‘the Great Power’ (ἢ μεγάλη δύναμις, ἡ ἀπέραντος {He is the Infinite Power, the Standing One). The term δύναμις {Power} was similarly used by some of the Christian Gnostics, e.g. by Satornilus.

3. Basilides again, that he may appear to have discovered something more sublime and plausible, gives an immense development to his doctrines. He sets forth that Nous was first born of the unborn father, that from him, again, was born Logos, from Logos Phronesis, from Phronesis Sophia and Dynamis, and from Dynamis and Sophia the powers, and principalities, and angels, whom he also calls the first; and that by them the first heaven was made. Then other powers, being formed by emanation from these, created another heaven similar to the first; and in like manner, when others, again, had been formed by emanation from them, corresponding exactly to those above them, these, too, framed another third heaven; and then from this third, in downward order, there was a fourth succession of descendants; and so on, after the same fashion, they declare that more and more principalities and angels were formed, and three hundred and sixty-five heavens. Wherefore the year contains the same number of days in conformity with the number of the heavens.

4. Those angels who occupy the lowest heaven, that, namely, which is visible to us, formed all the things which are in the world, and made allotments among themselves of the earth and of those nations which are upon it. The chief of them is he who is thought to be the God of the Jews; and inasmuch as he desired to render the other nations subject to his own people, that is, the Jews, all the other princes resisted and opposed him. Wherefore all other nations were at enmity with his nation. But the father without birth and without name, perceiving that they would be destroyed, sent his own first-begotten Nous (he it is who is called Christ) to bestow deliverance on those who believe in him, from the power of those who made the world. 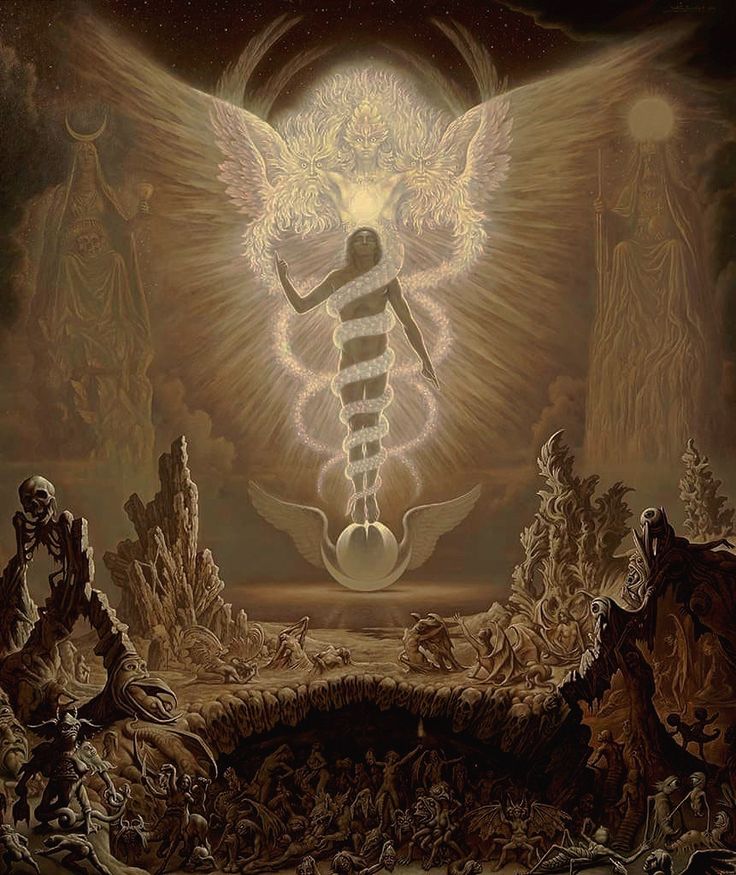 Given Jung's famous elaboration of Hermetic themes and Bosschart's interest since the early 1950s, this later painting suggests an interpretation of a singular event recorded from Carl Jung's own life.
In Memories, Dreams, Reflections Jung gives one account of how the Septem Sermones came to be written (the date referred to below is probably Sunday, 30 January 1916):

It began with a restlessness, but I did not know what it meant or what "they" wanted of me. There was an ominous atmosphere all around me. I had the strange feeling that the air was filled with ghostly entities. Then it was as if my house began to be haunted....

Around five o'clock in the afternoon on Sunday the front doorbell began ringing frantically...but there was no one in sight. I was sitting near the doorbell, and not only heard it but saw it moving. We all simply stared at one another. The atmosphere was thick, believe me! Then I knew that something had to happen. The whole house was filled as if there were a crowd present, crammed full of spirits. They were packed deep right up to the door, and the air was so thick it was scarcely possible to breathe. As for myself, I was all a-quiver with the question: "For God's sake, what in the world is this?" Then they cried out in chorus, "We have come back from Jerusalem where we found not what we sought" That is the beginning of the Septem Sermones. (Memories, Dreams, Reflections, pp.190-1)
Top
Post Reply
1 post • Page 1 of 1