by billd89
Emma and Ludwig Edelsteins' Asclepius: Collection and Interpretation of the Testimonies [1945] was finally published after WW2 formally ended and war-time paper restrictions were lifted. Tracing the origins of the project in correspondence and published announcements, several conflicting dates for the project's inception are exposed, and a curious exception appears for the Year 1938. This is part of a literary mystery and not a normal publishing delay.

To escape Nazi Germany, Ludwig Edelstein contacted Drs. Owsei Tempkin and Henry Sigerist at Johns Hopkins in April 1933. In Germany and then Italy, Ludwig informed Sigerist what projects he might pursue, to gain financial support (i.e. academic position and visa) from Johns Hopkins and the Rockefeller Foundation. The Asclepius project was probably Emma's idea, floated as she was completing her PhD thesis on Socrates in Plato and Xenophon (Heidelberg on 3 July 1933), since Ludwig was already focused on Posidonius. This was probably a six-year project of Emma, jointly published to support her husband (their career).

As I heard the Committee on grants-in-aid of publication of the American Council of Learned Societies is meeting on May 24, I would like to inform you that you will find an application of my Department pending. It is for the publication of a two volume book that Dr. Edelstein has just completed on Asclepius and his cult.

I think Edelstein and his wife have done a splendid piece of work. For six years, they have collected all literary testimonies on Asclepius and on the basis of this huge material, they have come to a totally new interpretation of Asclepius, his relation to physicians and medicine, and on the cult at large.

The first volume is a collection of all the texts in Greek with English translation, and I think this volume will be of invaluable help to a wide range of historians. The material is very much scattered and often difficult of access and many of the texts are by no means easy so that the translation should prove very valuable. I think this first volume should be very useful not only to philologists and archaeologists but to historians of medicine and religion. It should be to this field what the collection of Diels is to pre-Socratic philosophy.

The second volume which is based on the materials of the first and refers to it constantly gives the history of the god and his cult. The interpretation is so new that it will undoubtedly meet with a good deal of opposition from philologists, but I and others find that the scholarship is absolutely sound and I personally find the results perfectly convincing.

I have no hesitation to say that I consider this the most important and most scholarly study that has come from my Department in the last ten years and I would be very much indebted to you if you would support our application.

I did not send the book in through the History of Science Society because this would have taken a good deal of time and there is a possibility that Edelstein may be called to the Army. I am therefore anxious to publish the book as soon as possible as long as he is here.

With kind regards, I am
Yours very sincerely,

Henry E. Sigerist
The Edelsteins' research was not complete in January 1938 - when it was set aside for another 'healing cult project' fully-funded by the Rockefellers, quid pro quo for the $150,000 Grant which the Johns Hopkins Institute of the History of Medicine received on 1/10/1938. Their Asclepius project was put on hold, then restarted in 1939. I presume the 'Asclepius' ms. was mostly completed by mid-1940 then shopped around: it may have been edited and enlarged somewhat 1940-42, but it was not published until 1945.

Authorship was credited FIRSTLY to Dr. Emma J. Edelstein (Ph.D.): I believe this was her idea and interest, and husband Ludwig admits as much in print. Ludwig was working on a book about Posidonius at the same time (see below); he wasn't writing two books on totally different subjects, simultaneously and by himself, while teaching and organizing events for Sigerist. Asclepius - mystical healing - was Emma's focus. The spiritual program came from 'Renate' - as Ludwig said (often quoted), "she was REBORN."

6) Emma Jeanette Levy Edelstein was "Reborn" c.1930; this profound event even influenced their close friend, Leo Strauss, who 'copied' Emma. As for the timing of her 'Near-Death-Experience,' I think this scholar's date (i.e. 1933) for this seminal event is too late (see Howarth [2015] pp.91-2), as though she had various health issues over time:

After Emma’s marriage to Ludwig the couple had returned to Berlin, where both their families still lived.56 However, in 1933 they were forced to immigrate to Italy, and then to the US, after Ludwig was forced out of his position at the university by the Nazis. Therefore, Emma was actually awarded her doctorate after they had immigrated to America. Before this, it seems both Emma and Ludwig used their time in Italy as a chance to study;57 however, these endeavours were interrupted when Emma was taken ill.58 Hers was a serious illness in which Emma’s life was endangered. Nevertheless, she did recover, and after the event Ludwig named her Renata,59 ‘the reborn’. This was not just a casual nickname, but the name which she used in her own correspondence, and with which she was addressed and known throughout the rest of her life. In a professional capacity, however, she continued to use her birth name. Therefore, for the rest of this chapter and the thesis, Renata is the name which will be used for her.

7) Here is a telling hallmark, of uncertain date c.1930-33. Julius Edelstein A.-G. was Ludwig's family company; he assumed a manager's role when his father died (June 1931). It is further known that Colditz AG forced the firm into bankruptcy in 1932 but kept the name. Since the Edelsteins left Germany before 1934, and given that "Renata" was his Wife, so Emma's "Rebirth" logically falls sometime between their marriage in 1928 and 1932. Obviously, this new porcelain-line memorializes her "Rebirth" at some point after Ludwig assumed control yet before his family was forced out (late 1932?). 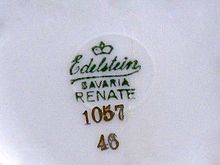