in the Gnostic tradition the women could make Jesus risen

in the Gnostic tradition the women could make Jesus risen

Note that, according to my scenario about the birth of the Gospel tradition, the oldest Passion Story was a Judaizing answer against the Gnostic myth.

Along the same lines, the final of Mark where women appear at the empty tomb:

When the Sabbath was over, Mary Magdalene, Mary the mother of James, and Salome bought spices so that they might go to anoint Jesus’ body. 2 Very early on the first day of the week, just after sunrise, they were on their way to the tomb 3 and they asked each other, “Who will roll the stone away from the entrance of the tomb?”

4 But when they looked up, they saw that the stone, which was very large, had been rolled away. 5 As they entered the tomb, they saw a young man dressed in a white robe sitting on the right side, and they were alarmed.

6 “Don’t be alarmed,” he said. “You are looking for Jesus the Nazarene, who was crucified. He has risen! He is not here. See the place where they laid him. 7 But go, tell his disciples and Peter, ‘He is going ahead of you into Galilee. There you will see him, just as he told you.’”

8 Trembling and bewildered, the women went out and fled from the tomb. They said nothing to anyone, because they were afraid.

...is a Judaizing reaction against a Gnostic myth who was part and parcel of the Gnostic propaganda to persuade the Jews to abandon their false God YHWH:

After the day of rest, Sophia sent her daughter Zoe, being called Eve, as an instructor, in order that she might make Adam, who had no soul, arise, so that those whom he should engender might become containers of light. When Eve saw her male counterpart prostrate, she had pity upon him, and she said, "Adam! Become alive! Arise upon the earth!" Immediately her word became accomplished fact. For Adam, having arisen, suddenly opened his eyes. When he saw her, he said, "You shall be called 'Mother of the Living'. For it is you who have given me life."
http://gnosis.org/naghamm/origin.html

What strikes about that mythical story, is that the women had the power of give resurrection to the (celestial) Adam (only a row earlier, crucified/"glorified" in outer space by the celestial Archontes).

"Mark" (Judaizer) had the women not only without that power of give resurrection, but even abandoning explicitly any claim in such sense, "because they were afraid".

Why was "Mark" so eager to despise the credibility of the women?

Were the women symbols of the excessive Gnostic freedom ?

I think that the answer is that the celestial Adam, once risen, had exalted Eve.

"You shall be called 'Mother of the Living'. For it is you who have given me life."
The Judaizers invented an anti-Eve: Mary of Nazareth. No need of presentation.
Top

Yeah, trying to catch his name, unsuccessful to do it in a fancy way
Top

I'd frame it as:
That find of that passage in the gnostic 'On the Origin of the World', aka "The Untitled Text", is a good one.
Top


not necessarily the 'culmination' (since the real 'culmination' of the judaizing anti-Gnostic counter-offensive is this), but one of the many reactions against the Gnostic propaganda (as "The Untitled Text").

yes, really. I am satisfied that in this forum at least you shares my enthusiasm for that finding by Painchaud.

Giuseppe wrote: ↑Tue Nov 17, 2020 3:14 am
... the real 'culmination' of the judaizing anti-Gnostic counter-offensive is this) ... one of the many reactions against the Gnostic propaganda (as "The Untitled Text").
.

Such theological change - perhaps evolution, perhaps competing narcissists - may not have been a reaction against Gnostic propaganda, and, despite things like the fifth document of codex II, it's feasible not all Gnostic texts were propaganda.


1 These statements are of usurping: setting aside the old beliefs and reaffirming they don't matter b/c they were supposedly but a sideshow from the real beliefs Paul is reaffirming.
Top

you may be interested to Neil's objection against my point.


But my counter-objection is still waiting for an answer by Neil.

What I prospect, is something of similar to this: 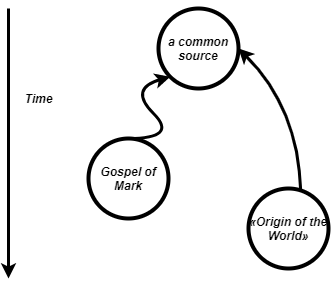 ...with the obvious corollary that the shared source did sound more as On the Origin of World than as Gospel of Mark.
Top

Your point to Neil, in your previous post there, is (I think) to go [straight] from On the Origin of the World 115,23 to Mark ie. to make a direct link. As I suggested above (2 posts up from this one), where I posted a re-ordered version of your table, there would be an intermediate step of the Pauline version in line with the propositions of Tom Dykstra, rgprice, Richard Carrier, and perhaps David Oliver Smith (+/- others), that Mark used and expanded many concepts in the the Pauline letters.* (it also seems Neil may not be aware of or doesn't agree with the view that some or many gnostic texts may have preceded the gospels and/or might be wedded to a mid-first-century dating of g.Mark.)

...with the obvious corollary that the shared source did sound more as On the Origin of World than as Gospel of Mark.

I would think, as I suggested above, the most straight forward —parsimonious— scheme would be

MrMacSon wrote: ↑Wed Nov 18, 2020 1:03 pm I would think, as I suggested above, the most straight forward —parsimonious— scheme would be

if you think (with the Radical Critics) that Paul is total forgery, then I would agree easily with you. But I like to think that Paul is 90% genuine so hardly a Hag Hammadi text could precede him in date. Note that RG Price (or any other scholar I know) cannot explain easily the episode of Pilate questioning Jesus and killing him. A text as Origin of the World is necessary to explain that enigmatic episode, since it preserves not coincidentially the same sequence: question--->answer--->crucifixion of glory. In Paul the same sequence of actions is too much implicit to be able alone to do an analogous persuasive case.

But the Neil's scruple and/or reluctance to accept my thesis is that the entire consensus agrees that Origin of the World postdates Mark.

Hence the only viable alternative is that a common source preceded both Mark and Origin of the World (hence my diagram above).

Neil Godfrey has to answer still on this precise point.
Top

The fact that a text like 'Origin of the World' was in the Nag Hammadi collection is only proof of its latest possible date (its terminus post quem) and that it was likely a text revered by a Nag Hammadi [or nearby) community or whoever collected those texts. Indeed, it was in two Nag Hammadi codices: II and XIII - immediately following Reality of the Ruler (aka the Hypostasis of the Archons, an exegesis on Genesis 1-6) which it has many parallels with: Reality of the Ruler has a Christian Gnostic beginning and end, is not otherwise anti-Christian; but it is considered anti-Judaic).

The dates of composition of both are only speculated, and probably on the basis of the old trope that all gnostic texts are post-Christian.

Origin intertwines views from Judaism, Christianity, Hellenistic, Egyptian and other 'thought'. Even though it contains 'Christian thought' none of it, as we agree, is as advanced as the NT texts on the same points. It could easily be an inter-testamentary text.


Whether Paul is or is not total forgery is largely beside the point (though if most if not all of the Pauline epistles (and the synoptic gospels) were written in the mid 2nd century then texts like 'Origin of the World' are more likely to have been read or even used by the author/s of the Pauline epistles and/or the other NT books).

Giuseppe wrote: ↑Wed Nov 18, 2020 10:59 pm Note that RG Price (or any other scholar I know) cannot explain easily the episode of Pilate questioning Jesus and killing him.

I don't think that's relevant to the relationship between these texts, including 1 Cor 2:6-8.

The fact that a text like 'Origin of the World' was in the Nag Hammadi collection is only proof of its latest possible date (its terminus post quem) and that it was likely a text revered by a Nag Hammadi [or nearby) community or whoever collected those texts.

This makes me remember the following decisive quote of Robert M. Price (p.1028 of his Incredible Shrinking Son of Man: How Reliable Is the Gospel Tradition?, my bold):

Couchoud's insight, if we accept it, might enable us to make a whole new sense out of the Nag Hammadi Gnostic texts that feature a beloved savior, whether Mechizedek, Seth, Derdekas, or Zoroaster, who is only late in the day identified with Jesus. We need some sort of new key to unlock the meaning of these enigmatic texts and the mystery of where and how they fit into the evolution of early Christianity. Couchoud's theory might provide it.
What did the unquoted portion of the Philippians hymn call its Christ figure before his exaltation and possession of the throne-name "Jesus"? Could it perhaps have been one of these names? It would imply that the Christian Jesus was merely a more recent stage in the development of a much more ancient mythic character, just like Seth, Enosh, and the other ancient figures venerated by the Gnostics despite an utter lack, in the nature of the case, of any biographical or historical data about them.
Couchoud has indicated the final door we must pass through if we are to be consistent with the methodology that has served us so well thus far. Dare we step through that door to what Schweitzer called "thoroughgoing skepticism"? Even if doing so will mean that the historical Jesus will have shrunk to the vanishing point?
"Couchoud's theory might provide", according to Bob Price, "some sort of new key to unlock the meaning of these enigmatic texts".

But so also this extraordinary finding: