There are various bits of Jewish Haggadah/Midrash scattered throughout the works of Clement of Alexandria. Mostly they have rabbinic parallels. However in Stromateis book I Clement says about Moses

Thereupon the queen gave the babe the name of Moses, with etymological propriety, from his being drawn out of the water, — for the Egyptians call water mou,— in which he had been exposed to die. For they call Moses one who who breathed [on being taken] from the water. It is clear that previously the parents gave a name to the child on his circumcision; and he was called Joachim. And he had a third name in heaven, after his ascension, as the mystics say— Melchi.

= raised by (God)
“Finally, from so little sleeping and so much reading, his brain dried up and he went completely out of his mind.”
― Miguel de Cervantes Saavedra, Don Quixote
Top

It is at the core of Deuteronomy 18:18. "... I will raise up" one like Moses.
“Finally, from so little sleeping and so much reading, his brain dried up and he went completely out of his mind.”
― Miguel de Cervantes Saavedra, Don Quixote
Top

It's not from Jubilees.
“Finally, from so little sleeping and so much reading, his brain dried up and he went completely out of his mind.”
― Miguel de Cervantes Saavedra, Don Quixote
Top

The name Melchi is easier to explain - https://books.google.com/books?id=knLh2 ... nt&f=false
“Finally, from so little sleeping and so much reading, his brain dried up and he went completely out of his mind.”
― Miguel de Cervantes Saavedra, Don Quixote
Top

My guess is that it comes from the lost Assumption of Moses cited by Clement elsewhere - https://books.google.com/books?id=ya3xN ... es&f=false
“Finally, from so little sleeping and so much reading, his brain dried up and he went completely out of his mind.”
― Miguel de Cervantes Saavedra, Don Quixote
Top

I suspect you are on the right track, thanks. See History of the Bible

This LINK gives a fuller expression to what interests me.
A second text also presents a royal name for Moses; however, it is not his parents that gave him this name, but mystics. Clement of Alexandria {c.201 AD}, writing in the 2nd–3rd centuries CE states the following in Stromata I.23.153,I.96 "τῷ παιδίῳ οἱ γονεῖς ἔθεντο ὄνομά τι, ἐκαλεῖτο δὲ Ἰωακείμ, ἔσχεν δὲ καὶ τρίτον ὄνομα ἐν οὐρανῷ μετὰ τὴν ἀνάληψιν, ὥς φασιν οἱ μύσται, Μελχί. The parents gave a name to the child, and he was called Joachim. And he had a third name in heaven, after his ascension, and the mystics say — Melchi."

From this quote it is clear that a group known to Clement had a tradition of Moses’ name as Melchi. The next two texts, which also claim that Moses was given a royal name by his parents, are George Syncellus and George Cedrenus, both Byzantine historians. They are from the 9th and 11th-12th centuries respectively. The remoteness of these historians from the text under consideration is not a problem since Byzantine historians had access to very early material.97 Syncellus is known to have used Josephus and an anonymous second source, which predates Josephus. If this is true, Syncellus (followed by Cedrenus) preserved an ancient name for Moses, similar to that found in VA.98 ...
Was "Melchi" some derivative of Melchizedek (a known ancient Canaanite god, archaeological evidence from the 10th C BC, etc.)? In some Jewish myth, Moses replaces Melchizedek at the right hand of God: these are contesting myths/cults c.300 BC. The Melchizedek tradition was never fully eradicated - it was older, folk, and extensive - so it periodically re-emerged in Antiquity.

Imagine that Moses/Hermes became a 'Little Melchi' c.400-300 BC, as Egyptian Melchizedekians fell and Mosaicists eventually gained power over the disparate, fractured Semitic communities of the Diaspora. From context, Clement is referring to information which is Jewish and at least several generations older (pre-100 AD). Logically, the tradition that Moses received an ascended name would date before the 1st C. AD. If Philo's Therapeutae were a Mosaic cult (as indicated) practicing/teaching some form of anagogy -- highly likely --, we can see why established Temple institutions and reactionary Pharisaic elements did not approve (1st C AD).

Scholars assume that "Assumption of Moses" is Clement's source here, but that book does not cite "Melchi" in Greek or Latin. There is no reason why Clement's "mystics" (descendants of the Therapeutae?) held very different beliefs on Mosaic anagogy from whatever Assumption implies. If we accept the lost Assumption of Moses dates (after Wiki) as "a 1st century Jewish apocryphal pseudepigraphical work"), that work may have come from a separate even contrary tradition/school. I have not researched these: R. Stokes, "Not over Moses’ Dead Body: Jude 9, 22-24 and the Assumption of Moses in their Early Jewish Context" in Journal for the Study of the New Testament, Vol. 40 No.2, pp. 192-213; A. Schalit, Untersuchungen zur Assumptio Mosis (Leiden: Brill, 1989); J. P. Schultz, “Angelic Opposition to the Ascension of Moses and the Revelation of the Law,” JQR 61 (1970–71) 282–307; J. Tromp, The Assumption of Moses: A Critical Edition with Commentary (Leiden: Brill, 1993); R. Van De Water, “Moses’ Exaltation: Pre–Christian?” JSP 21 (2000) 59–69.

Perhaps it was 'lost' because it was heretical, controversial? The topical matter is anagogy: ascension. That the A. A. were ascended masters is definite from Philo Judaeus. Literature providing a 'roadmap' to Pardes (or propaganda against those who would try) is what's at stake. Wiki also says: "From references in ancient works, it is thought that the missing text depicted a dispute over the body of Moses, between the archangel Michael and the devil." Why not Melchizedek and Melchiresha? ('Michael' and 'the Devil' sound 'late' to me: that combo would more likely appear in the Late 1st or 2nd C. AD and w/ Judeo-Christians.) As a refutation, Assumption of Moses might be a late attack or revisionist answer, against the Alexandrian Mosaic cult and its (older) alternative traditions.

Artapanus of Alexandria (c.225 BC) preserved an older tradition of Moses as Psychopomp centuries before the "Assumption" text.
Artapanus, in his history of the Jews, went so far as to identify Moses with Thoth-Hermes (the Egyptian messenger and scribe of the gods, who invented the letters, the various arts of peace and of war, as well as philosophy)…
Enoch or Moses? 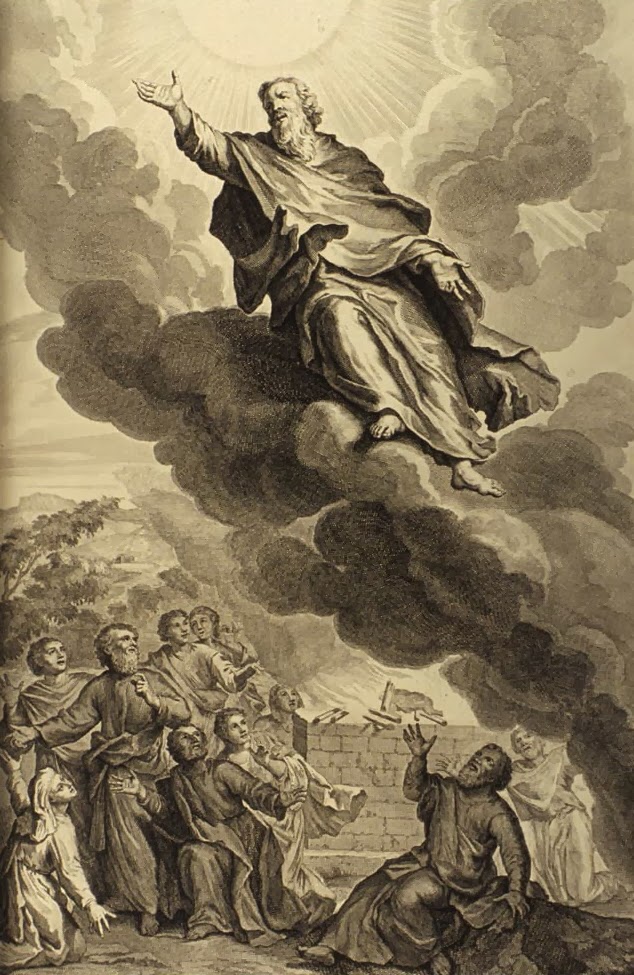 Is not the meaning of "Melchi" simply "Melek"? Perhaps Melchi is just derived from Melchizedek? I think that's what you're suggesting? Or it's the diminutive?

Michael and the devil fight over the body of the son of Michael? Rather, Michael = Melchizedek?

This typology is very common for Hadad and Epaphus, etc. I recognize they are not the same but the stories are heavily conflated by Phoenician antiquity. This is the Solar Bull and the god of death fighting over the propitiation. Cronus swallowing the stone instead of Zeus derives from the same tradition.

I also think it's somewhat clear that there's a strong likelihood that Moses is derived from Thutmose III who established Egyptian worship in Jerusalem, and as appropriate to his station and the peculiars of Egyptian worship at the time, he posed as the living incarnation of Thoth-Hermes. So you have a historical and mystical basis for Moses.

Conflating the Egyptian tradition with other Semitic features doesn't seem like a stretch. Nevermind that Apis/Adonis is already being conflated with Horus in certain ways by the Middle Kingdom period (the religious practice was sufficiently abstracted). And the post-Hyksos period saw the Lower Egyptian cults subsumed into the Upper anyway.

I think people back then would be more comfortable speaking of pharaoh as ascended Horus as the New Adam wearing the cloak of Thoth than modern scholars would.

A more interesting question is why Aaron and Joshua had to be included in the story, where Moses had to disappear from its finale? In what ways was the Moses figure insufficient? They Aaron typology serves the existence of separate priestly cult, or else serves the idea of Moses as an esoteric figure who was not meant to exist in the history.

Having Thoth-Hermes as an esoteric shadow existing with the Aaronic cult, with a vague memory that Thoth-Hermes came to Judea as an Egyptian prince does support this relationships.

Joshua is more difficult to explain. The 40 years in exile seem to service Joshua's existence, rather than the other way around. I would suggest Joshua is your Enochian figure, who is distinct from your Hermetic figure. Proposing that the authors of Exodus perceived Hermes and Enoch as independent in their schema.
Top
Post Reply
9 posts • Page 1 of 1