Epiphanius in his Panarion calls the Essenes Samaritans.

There is a great deal of evidence discussed here, that Samaritans/Samarians were well-settled in the Fayum of Egypt c. 250 BC. Samareitai might have referred to an ethnic 'Old Jewish' group. To outsiders, the long indigenous Samarians (who were quasi-Jewish, mixing w/ locals and 'orthodox' Jews) might have been conflated with the true Samaritans of Samaria, c. 100 AD.

In the Fayyum, a place was called 'Samareia', most likely because the original settlers came from that region. It is not known when they settled there. The village is first mentioned in the papyri of the late 3rd cent. B.C.E. [21]. The settlers could have been Samarians or (Proto-) Samaritans. However, most scholars assume that the inhabitants were Samaritans[22]. Yet, gradually the latter must have intermarried with Jews and the settlement lost its original character[23]. Eventually, Samareitai in Egypt came to mean 'inhabitants of (the village of) Samareia'[24].
From Origen's familiarity, and other Samaritan connections to Egypt,it's possible that 'Dositheus the Samaritan' may not have actually been from (or active in) Samaria itself. That the 'Samaritans' were also seen as Zadokites in Egypt also makes sense: they were a nebulously-defined ethnic.

Any other recommended sources on the 'Samaritans of Egypt'?


As an important side-note for my own work, W. M. Flinders Petrie's Personal religion in Egypt before Christianity [1909] p.79 follows and builds upon Moritz Friedländer's Therapeut-Essene thesis.

"of course, we have but a meagre statement, but as these ideas were familiar to Philon and Josephus they would be likely to allude to them had they been as prominent to the Therapeutae and Essenes as they were to their contemporaries. The explanation of these silences may well be that the writings so often mentioned as being treated with the greatest respect, were earlier than the rise of the ideas of the Wisdom and Logos. This is quite likely ; Wisdom, though often named as a quality, is not personified in Ecclesiastes, about 250 B.C. ; it is personified in Sirach, Ecclesiasticus, about 180 B.C., and in the book of Wisdom, perhaps 100 B.C. Hence the scriptures of the ascetics may be dated from before 200 B.C., as they did not refer to it. As we have seen that the ascetic community was already started at the back of the Fayum by 340 B.C., and that all their dogmas stated in later times were already familiar then in the Hermetic works, these points all agree well together. The Hermetic works are in fact the scriptures of the Ascetics."
This is the earliest suggestion (i.e. scholarly reference) that I have been able to locate, that Therapeutae wrote the Corpus Hermeticum. (I do NOT agree with Petrie's early dating of the Hermetica, however!)
Top

A potential source of associating Samaritans and Essenes is taking the former to mean keepers of Torah (even if that is a folk etymology) and the latter as observers (doers) of Torah (which I have argued* is the etymology).
*
http://people.duke.edu/~goranson/Essenes_&_Others.pdf
especially pages 537-540
and
http://people.duke.edu/~goranson/jannaeus.pdf
esp. pp. 14-15 and endnotes.
Top

Why doesn't anyone ever acknowledge 'hey our information from antiquity is shit.' The people reporting these things weren't exactly smart. There are corruptions in the transmission of their original information and - quite frankly - their reporting when clear is usually based on hearsay, half-truths and innuendo. Cue the frequent reporting on the existence of a 'phoenix bird' ...
Top

StephenGoranson wrote: ↑Mon Apr 19, 2021 12:14 am A potential source of associating Samaritans and Essenes is taking the former to mean keepers of Torah (even if that is a folk etymology) and the latter as observers (doers) of Torah (which I have argued* is the etymology).
*
http://people.duke.edu/~goranson/Essenes_&_Others.pdf
especially pages 537-540

Thank you for this, Stephen: for the Palestine ethnic, that conflation makes sense.

As far as I know - correct me if I'm wrong - Philo doesn't discuss Samaritans, in Egypt or anywhere? Yet archaeological evidence and numerous other references confirm 'Samaritans' (an unorthodox Old Jewish ethnic, I presume) lived in the Fayum. And so, they must have been in Alexandria too. By omission, Philo would count them as Jews - and rightly so, since they werent truly (nor contemporary) 'Samaritans of Samaria'. They were, instead, a quasi-Judaic ethnic - indigenous Judeo-Egyptians imprecisely distinguished by some (but not all) foreign observers. It makes sense that Philo would seek to 'convert' them to his brand of Judaism, also.

Following Jacob Neusner, I suppose many 'Judaisms' co-existed in this period. It wasnt that every Jewish community had its own cult, but we have no reason to assume every or most synagogues were uniform. A heterodox reality - w/ unknown diversity of forms - must have prevailed c.100 BC - 40 AD in Egypt & Alexandria. This I find fascinating - and I suspect the Christos myth might start somewhere hereabouts, too. (The Jesus bit got tacked on 2-3 generations/~70-125 years later.)

Elsewhere in the region, evidence of a Helios creed in synagogue art preserves an exquisitely Melchizedekian memory (viz., Sun of Righteousness, solar cult) long after explicit references to Melchizedek as Savior or Intermediary in sermons were forbidden by rabbinical rulings c.AD 75 and thereafter. 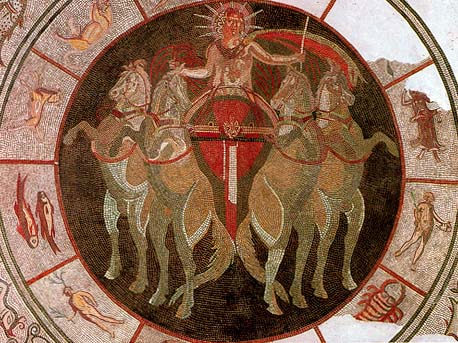