Here is a summary of my research and conclusions I wrote inspired by the post (viewtopic.php?f=6&t=1409). Using some linguistic principles and some historical textual criticism, I explore some possible theological and political motivations for the two genealogies in Genesis in the context of the Ancient Near East, as an Israelite anti-mythology constructed as a polemic against Sumerian and Egyptian imperialism, utilizing their own mythologies against them to construct a kind of naturalistic-political dualism.
//
A cursory look at the two genealogies present in Genesis 4 & 6 respectively gives the lines of Cain and Seth from Adam, respectively. It is clear that several names must be equivalences from different versions of a single tradition, e.g. Irad = Jared, Kenan = Cain, Mahalalel = Mehujael, etc, as per Fig. 1 and explained in Byron (2011):

We may make several interesting correspondences:

Scholars have long recognized the link Adam = Adapu, but we may go further still.

A first interesting thing to note is the importance of the number 7 in both genealogies, in which the first seven Kings of Sumer seem to be demigods, which is similar to the tradition in the Cave of Treasures which calls the Sethite line the Sons of Elohim (in contrast to the Cainite line the Sons of Man, with the implication being that the punishment of the Flood was the sin of intermarriage of the two lines).

We end at number 9 (or 10, if we add one to Alulim/Adapu to correspond to Noah) before the Flood.

If we compare the genealogies to the King List, we can see that two generations under the founder of the line (Seth/Adapu), both generations have similar names—Cain & Kenan versus Enmengalana & Emengalama. Thus, in the original genealogy, Cain must have been fourth in the line from Adam, behind Proto-Seth (#2) and Proto-Enos (#3) (Byron 2011).

I would like to further suggest, like Adapu, that most of the names of the Antedeluvian Patriarchs are derived from Semitizations of Sumerian proper names of their Antedeluvian Kings. Thus:

I tentatively suggest the correspondence: Uanduga = Enoch, in which case, Proto-Enoch would have been second in the line of “advisors”.

Compare the names the 7th/8th King and Son of God, respectively: If we ignore the theophoric endings, Enmendurana(/ki) sounds like Methushael/Methuselah (EMethura-selah via the assimilation of r to s), and Enmenluana sounds like Mahalalel (= EMahalalel?) while Enmengalana sounds like Mehujael (= EMehujael). Thus, Proto-Mahalalel and Proto-Mehujael must have been consecutive in the original list, and Proto-Cain became superimposed onto Proto-Mahalalel to account for the fourth in the list. This is further suggested by the similarity of Enosh = Enoch and the brotherhood of Cain and Seth. Additionally, suggested etymologies to the term Selah (the suffix) have been suggested to include “exalted” and “set apart” (Brown et al. 2006) which fits the seventh Patriarch/Apkallu ascending to Heaven, unlike the others who died mortal deaths. It is also reminiscient of the Sumerian meaning of Enmenduranki meaning “Chief of the Powers of Duranki” and Duranki meaning “place of the meeting of Heaven and Earth”. Thus I suggest that (Proto-)Methuselah was the original Semitic name for the seventh Patriarch/King.

(Note: The -el and -ah suffixes seem to indicate theophoric names involving different Israelite gods, i.e. El and Yah, though Yah would have been the local representative of El to the Israelites. However, given that I reconstruct here a possible E-Methu-Selah from Enmeduranki, it is likelier that the -ah suffix was part of the overall -Selah root rather than a name for a God which would have been in any case anachronistic at this stage.)

The correspondance between the literal “Son of God”, that is, demigod, status of the Apkallus (Viziers) of the Sumerian Antedeluvian Kings, with the figurative “Son of God”, that is, “Holy Man” or “Priestly line” of the Sethites if they view themselves as heirs to the Egyptian God Set, who was often associated with foreigners and the desert (te Velde 1967). Even YHWH tells Moses and the Israelites to remember to treat the foreigner with kindness since they were foreigners [i.e. Sethites] in the land of Egypt (Ex. 23.9)(!) This is corroborated by the theory of the apocryphal text “The Cave of Treasures”. By analogy, the Cainites here in Genesis are the Sumerians (and possibly Babylonians).

Indeed, the Kingship was taken to Bad-Tibira, meaning “Wall of the Smiths”. Cain is connected to the Proto-Semitic “Qyn” meaning Smith, thus Cain must have been synonymous with Bad-Tibira and hence a topos for something like “worldly intentions” (in contrast to the “spiritual intentions” of the Sethites). We thus exclude Cain as a proper name and rather must be viewed as a symbol for the Sumerian-Babylonian state bureaucracy, as the Bronze and Iron Ages were quite literally symbolized by their metal work.

There seems to be an anti-miscegenation polemic against the Cainites twice. First, there is a polemic against them in the story of the Flood where the Nephilim (= hybrid Cainites) are condemned, and second, in the book of Joshua, where a Midianite (= Cainite) woman is punished for allegedly seducing an Israelite man leading to the massacre of Midianites by the Israelite army. The Midianite-Cainite origin of the Yhwh priestly line, represented by the High Priest Jethro, is thus erased by an association with the hated Babylon/Sumer (Harris 1985).

As an aside, we should note the similarity of the Cain-Abel story with the Horus-Isis-Osiris-Set narrative, but here the roles of Cain/Horus [= Egypt/Empire] and Set [Heaven] have been inverted for polemical purposes. Horus was the symbol of Egypt, and to an Egyptian that was Good. But to an Israelite that was Very Bad. By extension, Canaanite (= Cainite) identity, as Dr. Brendon Benz explains here (https://www.youtube.com/watch?v=vZ1GmJ_8lro) became demonized in a kind of identity politics, because it was the sub group of Canaanites who wanted to cut off reminders of their past as vassals to Egypt, and hence Canaanite became something shameful following the rebellion of the Israelites. [Dare I suggest a political polemical pun in the motivation behind mandating circumcision as a literal Cutting Off to symbolize a declaration of independence from other worldly powers and total dedication to God?]

I further hypothesize a likely assimilation of Egyptian Set[h] and YHWH, since YHWH is well known to mean He Blows and was the local Midianite storm God. Seth as the God of foreigners, deserts and chaos, can easily become assimilated to a god of "storms", given the frequency of desert storms in the Middle East. This likely happened in the post-Hyksos period. This later assimilation survived in Sethite Gnosticism where Jesus is seen as the incarnation of Seth, who is the true god of the world, and not YHWH.

The land of “Nod” to where Cain is said to have been exiled is associated with “wandering” (Asimov 1981) or “dozing off” (Jacobson 1990). While I cannot think of any association in Sumerian mythology of their Kings wandering off, perhaps this is instead a link to the Babylonian Exile of the Israelites itself! In this case, the term Nod would rather mean “The realm of our wanderings” in the Israelite mythology, which would correspond to Babylon/Sumer. Given that Cain was exiled out of Eden (= Heaven) to the land of Nod this is identical to the narrative of the Sumerian Kings List in which the Kingship is sent to Eridu once descending from Heaven (Graham 2019).

Compare this to the Shi‘ite cosmological system of a recurring list of seven major Prophet-Imam pairs, with the Imams secretly respected as superior to the Prophets as the Spirit cannot be corrupted by the world, unlike the Word (Amir-Moezzi 2005). We may perhaps suggest an origin of this dualistic system near Karbala, as this was not far from the Sumerian homeland.

The absence of a King corresponding to Ensipadaza in the land of Larak suggests its relative unimportance to the Israelite narrative.

If Proto-Lamech was originally the seventh King, this may explain the importance of the vengeance of Cain 7 and 77 times mentioned in Genesis 4. Note that Sethite Lamech’s age is listed as 777 years; this seems to be artificial in a reordering of a 12,000 year Josephite line to a 12,600 year Mosaic line (Northcote 2007). We may recall a connection of Enoch’s age with the solar cult (de Vaux 1965) being 365 years (= 1 solar year) and his connection with Utu-Apzu, the 7th Apkallu named after the Sun God Utu who was raised to Heaven (Conrad & Newing 1987).

We may tentatively suggest the correspondence Tubal-Cain = Utu-Ap-El-Qyn. Since Utu is the God of the Sun and of Justice and Apzu = ApEl is the name of the primordial river-streams, his name may mean something like “the Divine Justice of the Smith-Kings from the Waters”. This is appropriate as a name since the Nephilim, the last of the Cainites, are wiped out in the Flood (Cave of Treasures). Since Utu-Apzu is the last of the Antedeluvian Sumerian Viziers, I consider him to be Proto-Enoch and his name to be a Proto-Tubal-Cain.
Further potential correspondences:
Enmeduga = Enmedsa => Ennetz = Proto-Enos?
Enmebulaga = ENebula => ENjabul/ENjebul = Proto-Ja/ubal?

Thus, the line can be reconstructed as representing a Semitization of the Sumerian Kings List!

First, the Kingship was exiled from Heaven to the land of our wanderings (Sumer at Eridu).

Then, the Kingship was moved to Bad-Tibira, the House of the Smiths (Cain, Kenan).

(Then, the Kingship was moved to the House of Larak.)

Then, a Flood came upon the Earth.

In the Proto-Gnostic conception which probably emerged during the Exile, the creator god Yhwh (= Enlil) punishes mankind for the Flood due to the sin of miscegenation between the High Priests of Seth with the Kings of the Land of Cain. Now in the mainstream Israelite conception, Yhwh was the ruler of the world and was Israel’s representative of the King of the Gods, El, who sat in Heaven. But to the Proto-Gnostics, the trickster and creator (Earth) god El-Sophia (= Enki-Inanna) was the true God. He therefore subverted Yhwh’s plan by giving secret knowledge of the Flood to the Cainite Nephilim Utnapishtim/Ziusudra/Proto-Noah, thus saving Mankind. Since Proto-Noah in this secret mystery religion was a celebrated Cainite, perhaps this version of the Deluge was an anti-Israelite polemic composed by disgruntled Midianites residing in Canaan who flet betrayed, in a similar way that the story of Cain (the Smith) and Abel was an anti-Babylonian polemic by Judahite Exiles in Babylon. (Among Proto-Noah/Lamech’s Cainite descendants was the Midian High Priest Jethro who introduced to Moses Yahwism.) Eventually this reading of the Flood was suppressed by mainstream Rabbinical authorities by the official fusion of the wills of El and his representative Yhwh, but survived among heterodox Jewish sects and re-emerged during early Christianity, with Jesus the Splendour taking the place of El. At the same time, in the new orthodox Judaism, Baal soon replaced Enki-El as the trickster and became synonymous with evil and betrayal, after the Baalist Northern Israelites were defeated and its leaders deported by the Assyrians, while the Yahwist Southern Judeans survived.

Byron, J.. Cain and Abel in Text and Tradition: Jewish and Christian Interpretations of the First Sibling Rivalry. BRILL. 2011.

The only outstanding question I have is why does the daughter of Lamech who was cursed have the same name as Noah's wife?
Top

Re: East of Eden

I don't believe 'Eden' was in Sumer/Babylon -- rather, the Garden was in the (Eastern) Nile Delta. So 'Nod' -- insofar as it may imagined a real place, was probably in Edom. 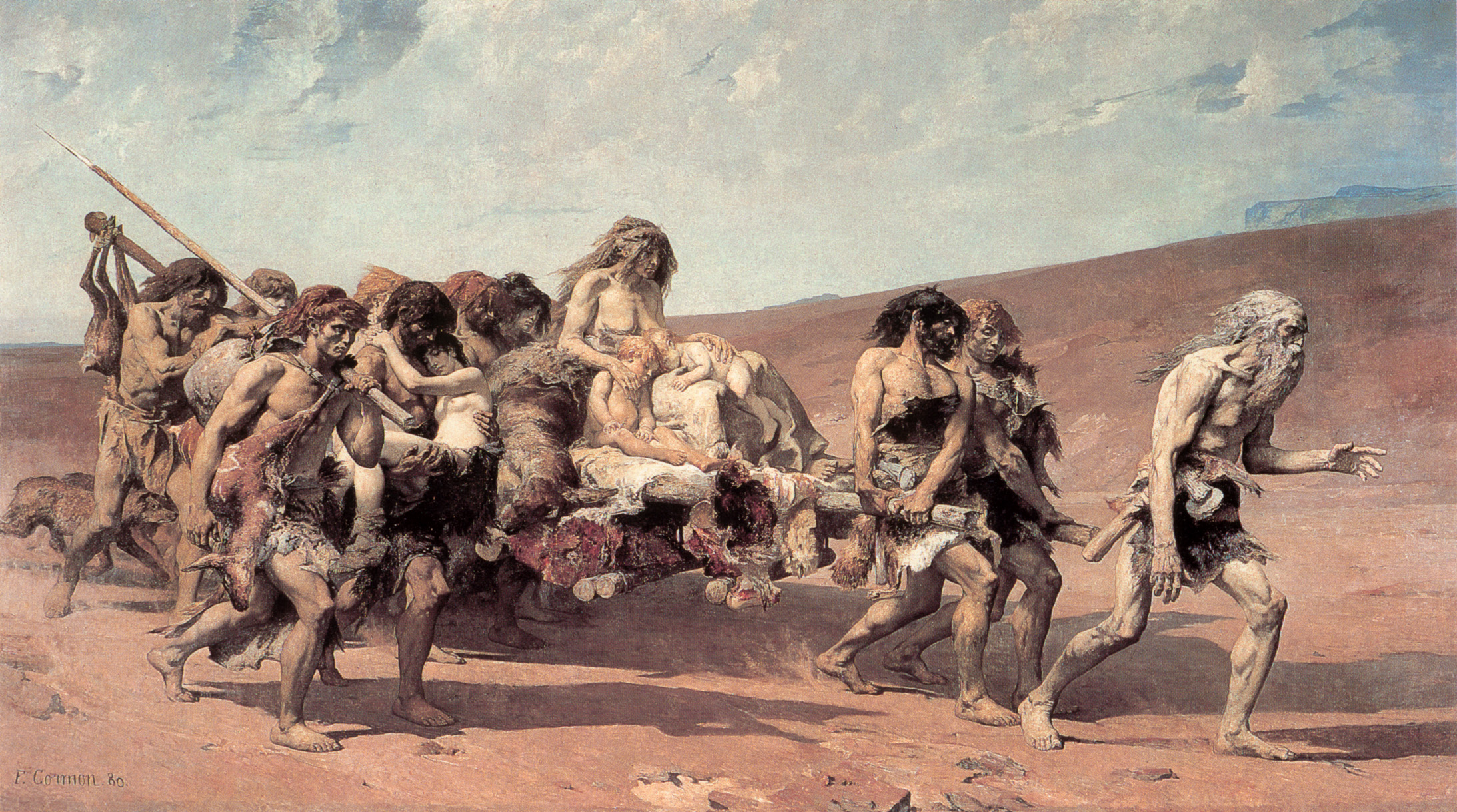