Peter Schäfer has proposed that many inhabitants of Judea may have supported the Hadrian's policies int he region, with some Judeans helping to suppress the revolt once it erupted.
http://www.westarinstitute.org/wp-conte ... adrian.pdf

The hypothesis has plausibility for the only reason that it was surely not useful to mention too much names.

I have in addition a clue to think so.

In Mark 12:13, the “Herodians” are who is testing the Jesus's tribute to emperor. This is expected by people who served directly the Emperor (Hadrian) more than a mere vassall of the emperor (Herod).

In Mark 3:6
Then the Pharisees went out and began to plot with the Herodians how they might kill Jesus.
why would the “Herodians” (really: the Hadrianians) have had a reaction against Jesus in virtue of the miracle of the hand?

Only, see the episode:

3 Another time Jesus went into the synagogue, and a man with a shriveled hand was there. 2 Some of them were looking for a reason to accuse Jesus, so they watched him closely to see if he would heal him on the Sabbath. 3 Jesus said to the man with the shriveled hand, “Stand up in front of everyone.”
4 Then Jesus asked them, “Which is lawful on the Sabbath: to do good or to do evil, to save life or to kill?” But they remained silent.
5 He looked around at them in anger and, deeply distressed at their stubborn hearts, said to the man, “Stretch out your hand.” He stretched it out, and his hand was completely restored. 6 Then the Pharisees went out and began to plot with the Herodians how they might kill Jesus.
The episode remembers another hand, of a Roman: 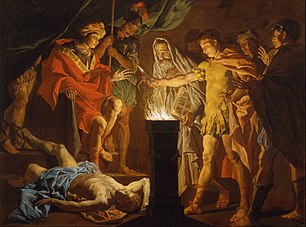 I am not arguing that Mark had in mind just the episode of Mucius Scaevola. I am pointing out that raising his right hand signified a promise or sacrifice, during a civil-religious rite, to pay homage to the Emperor, the State, the authority, etc.

Since the man was stretching the hand under command of Jesus, then that act could be meant as an act of homage to Jesus himself, as in contrast against the only earthly alternative candidate for a homage of the kind: the Roman emperor.